What a wonderful year 2015 was!  Cider Says has now been up for just over 6 months, and I’ve published 120 individual cider reviews, plus tasting notes, trip reports, news, and other posts.  Like other cider bloggers, I thought it would be fun to make a list of my favorite ciders of 2015.  To make it a bit different and easier, I put them into categories instead of trying to do a top ten list or similar.

Note that I wouldn’t try to make a list of the best ciders, just those I enjoyed, as it would be an impossible task to try every cider out there and be impartial.  My only criteria for this list is to only include ciders I reviewed at Cider Says (which is probably 99% of what I drank since I started the blog). 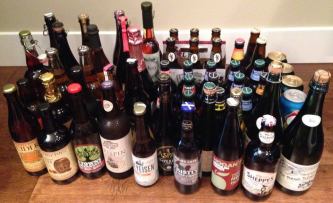 Favorite dry cider:  Eden Sparkling Dry.  I’m usually not a huge dry cider fan, but I was impressed by this one.  Its made from a blend of heirloom apples (including 50% Kingston Black) using traditional labor-intensive methode champenoise.  I was lucky enough to try it with cidermaker Eleanor Leger.  Its also oak aged, but that influence remained mild.  I enjoyed how well-crafted and balanced the flavor was, and think its a great alternative to champagne.  Interestingly enough I didn’t like the Sparkling Semi-Dry (review not yet posted), as it barely had any carbonation and had some sourness & funk, but its possible it wasn’t the intended result.

Favorite sweet cider:  Moonlight Meadery How Do You Like Them Little Apples?  This is a tasty draft-only cider with rich ripe apple, honey, oak, brown sugar, floral, and whiskey notes.  I’ve really enjoyed everything from Moonlight Meadery so far, and they have quite a lineup between meads, ciders, and cysers.

Favorite barrel aged cider:  Traditions Bourbon Barrel 2012.  This was my favorite cider from Seattle Cider Summit 2015.  Its made with Dabinett & Kingston Black cider apples.  Traditions was a line of ciders made by 2 Towns, but they recently decided to re-label them all under 2 Towns.  I was able to pick up a bottle, and wish I bought more.  It was closely followed by Whitewood Whisky Barrel Aged Kingston Black (80% Kingston Black and 20% Porter’s Perfection), which I also tried at Cider Summit.  Both were dry, rich, full-flavored, and had significant barrel & spirit influence.

Favorite fruity cider:  tie between Eaglemount Quince and Snowdrift Red.  Both are wonderfully but subtly fruity.  Eaglemount adds quince fruit to the apples for their cider, but Snowdrift used red-fleshed apples (no other fruit additions).  Both are quite complex.  I picked up a lot of tropical fruit with Quince, plus some vanilla and honey.  With Red, I picked up berry, watermelon, and cranberry notes, which is amazing to have all come from the red-fleshed apples.

Favorite herbal cider:  Finnriver Lavender Black Currant.  I tried this on Nitro, which added a unique creamy froth.  Although the addition of lavender wasn’t overtly noticeable, I enjoyed this even more than their regular Black Currant (probably as it wasn’t as tart).  Although the apple is well hidden with this cider, the black currant flavor is wonderful.

Favorite single varietal: Liberty Ciderworks Manchurian Crabapple.  This was a very unique 12.5% ABV cider that Liberty described as port-style.  It tastes like it was fortified with apple brandy, but wasn’t.  Bold and boozy (in a good way).  Manchurian Crabapples have a unique flavor, and this cider isn’t as tart and in your face as cider I’ve had which used other crabapple varieties.

Favorite spiced cider:  2 Towns Nice & Naughty.  I used to think I didn’t like spiced cider, but I’ve found I do, as long as it isn’t overly spiced or sweet (which I haven’t found to be the case yet).  I’ve tried both the regular and barrel aged versions of Nice & Naughty, and oddly enough liked the regular version better.  This is an imperial spiced cider (10.5% ABV), and I enjoyed it better at closer to room temperature.

Favorite hopped cider:  Cider Riot! Champoeg X-17.  Although I’m not a big hopped cider fan (I don’t even like beer), I’ve tried a handful of hopped ciders at tastings and such.  I like those which are milder on the hops, coming across more with herbal & floral notes.

Favorite Imperial style cider:  2 Towns The Bad Apple.  This is a 10.5% ABV barrel aged imperial style cider.  Apple-forward with rich apple, honey, vanilla, and oak notes.  I think this is a great deal too at $7.50 for 500ml.

Favorite perry:  Eric Bordelet Poire Authentique.  This is a tasty easy drinking 3.5% ABV French perry with a bold clean balanced flavor.  A close second is a similar French perry, Domaine Pacory Poire Domfront.  Both were quite different from the American perries I’ve tried, and tasted more like cider from Brittany France–sweet, rich, and sparkling (or at least the Eric Bordelet was sparkling when it was first opened but not by the time I got a sample).

Favorite cyser:  Moonlight Meadery The Last Apple.  Cysers are made from fermenting apple juice and honey, so are a cross between cider and mead.  This is a lovely 16% ABV bourbon barrel aged cyser with complex honey notes.  I tried this on tap and was excited to find a bottle of it, although its quite pricey.

Favorite multipack craft cider:  Reverend Nat’s Revival.  I reviewed this cider before it became available in a six pack, which is a great change as it makes it significantly less expensive per ounce.  I hope more craft ciders I enjoy become available in multipacks, as it really helps the affordability.  This is a tasty cider with some tropical fruit notes which were amazingly created only from the yeast varieties used.  However, I’ve found the topical fruit and yeast notes in this cider vary by batch…sometimes I enjoy it much more than other times.

Favorite English cider:  Aspall Imperial.  I’m a huge fan of Aspall, and have really enjoyed every cider from them I’ve tried so far.  However, Imperial is by far my favorite.  I loved how rich and full-flavored it was, with some mild tannins from using cider apples.  I think Aspall is a great value as well, at approximately $8 a 500ml bottle, which is actually less than many local craft ciders.  Sheppy’s Oak Matured would probably be a close second, with strong oak influence (the most I’ve found so far).

Favorite French cider:  Dan Armor Cuvee Speciale Cidre Brut.  Bubbly, sweet, and rich…what’s not to like?  This was also a great deal at only $5 for a 750ml bottle at Trader Joe’s.  They appear to have stopped carrying it though (and they appeared to have been the only ones offering it in the U.S.).  Also, although the first time I tried it was amazing, the second time wasn’t quite as good.  Le Brun Organic and Celt would probably be close seconds.  Note that all three of these are ciders from the Brittany France area…so far I haven’t been a fan of any cider from the Normandy France area, which have tended to be drier, less carbonated, funky, and sour.

Favorite canned cider:  Downeast Original Blend.  I obtained a sample case of ciders from Downeast, their Original, Winter, and Cranberry blends.  They were all quite tasty, but Original was my clear favorite.  Until this I hadn’t been too impressed with any canned cider.  Too bad they aren’t available in WA, as they would have a place in my fridge.

Favorite local canned cider:  Cascadia Ciderworks United Dry.  This was the first local canned craft cider I enjoyed.  I find most canned ciders to be very mild, likely as they are intended to be sessionable (easy drinking, low ABV), when in contrast I prefer a full-flavored cider.  Cascadia Dry (more semi-dry) however had some richness and even noticeable tannins.

Favorite commercial cider:  Woodchuck Winter Chill.  Although I am pro craft cider, I still enjoy commercial cider from time to time.  This cider is full-flavored with great oak and vanilla notes.  Its definitely sweet, but a bit less than many other commercial ciders.  I also enjoy Woodchuck Gumption, Spire Mountain Dark & Dry, Ace Joker, and Crispin Original.

Favorite ice cider:  Eden Heirloom Blend.  I’ve only tried a few ice ciders so there weren’t many to consider, but Eden’s Heirloom Blend was amazing…rich and sweet with notes of caramelized sugar, brown sugar, caramel, vanilla, and honey.  I look forward to trying more ice ciders from Eden.

Favorite other cider:  Locust Bittersweet Reserve.  I wasn’t sure what category to put this in, but its a unique and enjoyable cider made with bittersweet apples.  I found orange, spice, raisin, honey, caramel, and coffee notes.  Its also super local, made probably 20 or 30 minutes from me in Woodinville WA.

Favorite cider-related beverage:  Finnriver Pommeau.  This is related to cider as its made with apple juice and apple brandy.  Its a real treat…rich, high ABV, and full-flavored, with notes of burnt caramel, vanilla, and oak.  I’m hoping to pick up a bottle when I do the Port Townsend cider loop next month.  A close second would be Schilling Barrel #2.

Well, I think that does it, a list of 32 of my favorite ciders from 2015.  They have a lot in common–most are rich and full-flavored.  Still, it seems like so many great ciders didn’t make the cut, which is unfortunate.

What are your favorite ciders?