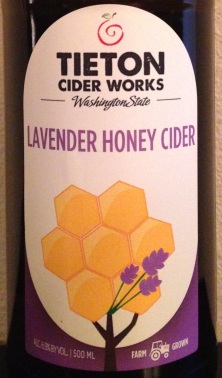 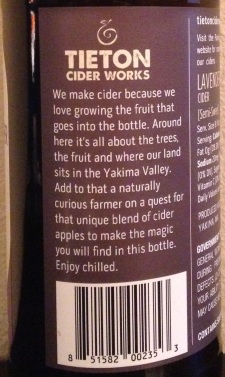 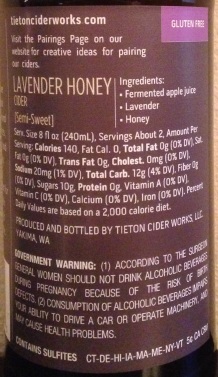 Cider Description:  none given

Cidery Description:  From branch to bottle, Tieton Cider Works controls every aspect of the growing and cidermaking process. Tieton Cider Works boasts the largest orchard of cider varieties in Washington state and the largest Perry pear orchard in the United States. We blend our gnarly, inedible cider fruit with our organically grown dessert fruit. We’ve been growing apples, apricots, cherries and pears on Harmony Orchards – our family farm – since the 1930’s and are thrilled to be involved in Re:interpreting the tradition of cider making.

Price:  $6.99
Where Bought:  Total Wine
Where Drank:  home
How Found:  Browsing.  I had heard it was available on draft but hadn’t had the chance to try it. 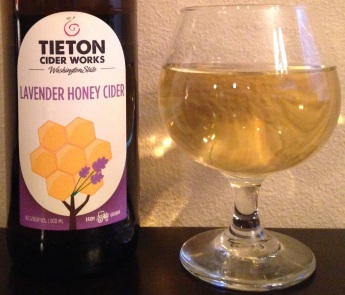 My Opinion:  I liked it.  There were two distinct stages of this cider when tasting, which was pretty unique, but they also seemed to compete a bit with each other.

Most Similar to:  I’ve actually had 5 ciders with lavender (Elemental Pom-Lavender, Elemental Lavender Rose Petal, Greenwood Lavender Blackberry, Seattle Cider Lavender Lemon, and Finnriver Lavender Black Currant), but none also had honey, which is fairly commonly added to cider (it even has a name when they are co-fermented, cyser).  My favorite cider with lavender is Finnriver Lavender Black Currant, especially when on Nitro tap.  Some of my favorite ciders with honey are Finnriver Honey Meadow, Long Drop Vanilla Honey, and Moonlight Meadery How Do You Like Them Apples.

Closing Notes:  This was released last year too, but somehow I missed it (probably as I think it was draft-only last year).  My favorite Tieton cider remains Bourbon Peach, which I’ve only seen on draft, as their summer seasonal, but hopefully they do bottles this summer.

Have you tried Tieton Lavender Honey?  What did you think?