Review of Worley’s Premium Vintage 2013 (Lot 9).  Note that apparently the “Premium” refers to Worley’s believing this was the best cider they made of that vintage.  This is real proper English craft cider, similar to Sheppy’s, not the fake stuff they import in larger quantities here in the U.S. such as Strongbow Gold Apple or Blackthorn (although Sheppy’s has been around far longer than Worley’s).  I’ve tried one other variety from Worley’s, their Special Reserve, at Cider Summit Seattle 2015 (my tasting notes here). 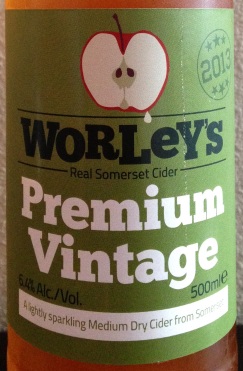 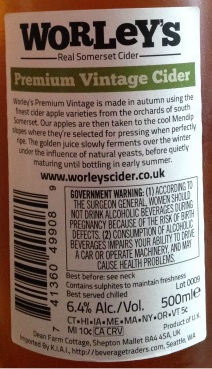 Availability:  limited in the U.S., but any higher end bottle shops which carry imported cider would probably carry it / be able to get it

Cider Description:  A medium-dry, slightly sparkling cider – with good tannin and a spicy finish. Best served chilled.  The 2013 Premium Vintage is a blend of early-season cider apple varieties from some of South Somerset’s finest orchards. Freshly pressed juice is fermented under the influence of natural yeasts then slowly matured on the cool slopes of the Mendip Hills. The full-juice cider is sweetened, filtered and lightly carbonated at bottling to produce an unparalleled cider with plenty of flavour and a long, spicy finish.

Cidery Description:  A hobby that got out of control.  We first made cider as a bit of fun for ourselves and our friends. Now here we are nearly a decade later and we’re still having fun but we’re making a lot more cider!  Our first experience of making was when we bought 50 gallons of juice off the farm press from the iconic Roger Wilkins in Mudgely, Somerset. We made the mistake of adding in a bit of sugar and ended up with 10.5% cider. It was lethal and one of the neighbours spent a few hours in a ditch as a result of downing a couple of pints.  Lesson learned, we began to find our own fruit in various small Somerset orchards and gradually started to master the mysterious arts of fruit selection and fermentation.  A few years ago we decided if wanted to carry on making cider we’d need the cider to start making a contribution to its upkeep. So we gradually started selling a bit. Now we’re making over 30,000 litres a year and don’t have time to have proper jobs any more!

Traditional cider made with care.  Here at Worley’s our main philosophy is that the best cider allows the fruit to do the talking.  All our ciders are made from fresh-pressed cider apple juice, once a year at apple harvest time. Using very high levels of apple juice is an approach only used by craft makers of traditional cider.  We always allow all our ciders to ferment at the cool ambient temperatures of autumn and winter, using only the natural yeasts found in and on the fruit and in the fermenting environment. This approach leads to complex but mellow flavours with maximum fruity tastes and aromas. It’s a bit of a gamble using wild yeasts as things don’t always go according to plan, which is why the larger makers don’t do it, but the results are well worth the risk in our opinion.  To make the best cider you need to use the best fruit at the peak of its ripeness. All the apples we use are the finest vintage cider apple varieties from the sun-drenched orchards of south Somerset. We use anywhere up to 16 different varieties, which we aim to blend into a decent cider before pressing. Then we do another round of blending once the different ciders have matured, which usually takes place in late May.

Price:  $11.75
Where Bought:  Full Throttle Bottles in the Georgetown neighborhood of Seattle WA
Where Drank:  home
How Found:  Browsing.  The best selection of Worley’s I’ve seen in the Seattle area by the way was the Lake Union area Whole Foods, which had three varieties (Premium Vintage, Special Reserve, and Mendip Hills).  Full Throttle Bottles had Premium Vintage and Special Reserve I believe. 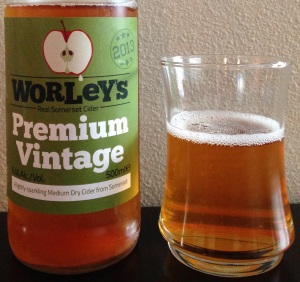 First Impression:  Significant yeast sediment at the bottom of the bottle.  Deep gold amber.  High carbonation upon pouring with residual foam.  Rich slightly funky sweet cooked apple scent.  This is one of those ciders I just wanted to sniff for awhile as it smelled scrumptious!

Opinion:  On the sweeter side of semi-dry (some sources say this is back sweetened, which I find interesting).  Moderate to high tannins and astringency (definitely made from cider apples!).  Moderate lingering bitterness.  Low acidity.  Well balanced.  Rich sharp complex almost smokey flavor.  I pick up some wood notes although as far as I know this wasn’t barrel aged (but was aged both before and after bottling).  Full bodied.  Slightly funky with noticeable yeast presence (note that this was wild yeast fermented, which is rare as it is more unpredictable & risky; more commonly cidermakers kill off any natural yeast present and use a commercial yeast strain).  The carbonation started out rather high but rather quickly it went a bit flat.  This is a great example of what I believe to be real English cider!  Hopefully someday I’ll make it to England and see for myself (I’ve been before but as a child).  I enjoyed this cider more as it warmed up to between fridge and room temperature, as it smoothed out a bit.  My husband really liked this cider too, which is rare.

Most Similar to:  Other English and English-style ciders.  The closest I’ve probably had is Liberty Ciderwork’s English Style or Alpenfire Ember, both of which I tried at Cider Summit Seattle 2015 (tasting notes here).  The Liberty one was lower tannin than this and the Alpenfire one was higher tannin than this.

Closing Notes:   Very good!  However, my favorite English cider so far is still Sheppy’s Oak Matured, and here in the U.S., Liberty Ciderwork’s English Style.  I especially like the strong oak barrel flavor from the Sheppy’s.  Both are a bit more affordable too, especially the Sheppy’s at $7 instead of almost $12 for a 500ml bottle (the Liberty runs $14 for a 750ml).  I look forward to trying more English ciders such as from Worley’s.

Have you tried any ciders from Worley’s?  What did you think?