Review of Kite & String’s Royal Cider, ice cider fortified with apple brandy then oak barrel aged.  It is my first time trying this, but I have had their Baldwin and Honeoye.

Availability:  limited, probably only in the Northeast, plus online sales

Cidermaker’s Notes:  Following a passion for port wines, Royal Cider was born.  Beginning with a a high acid blend of heirloom apples cold concentrated in the winter of 2015 to 40+ brix. Fermented to 13% ABV then fermentation was arrested via fortification with apple brandy to 18% ABV. Then barrel aged to soften the edges and allow the brandy to settle in. Naturally clarifying, requiring no filtration.

Price:  $28
Where Bought:  their website
Where Drank:  home
How Found:  online discussion 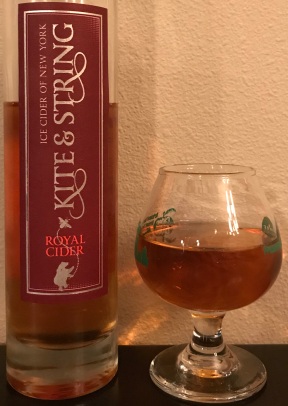 My Opinion:  I liked it.  More ice cider than Pommeau.

Most Similar to:  ice cider + a bit of Pommeau

Closing Notes:  I think Eden ice ciders are still my favorite so far.  My favorites from Eden are are The Falstaff and Brandy Barrel Aged Heirloom.

Have you tried Kite & String Royal Cider?  What did you think?

Tasting notes #36 from the Schilling Cider House in the Fremont neighborhood of Seattle WA.  Check out my past posts from the cider house here.

I was here on a Monday afternoon with my husband and a friend from out of town.  We skipped work to hang out with our friend at Pike Place and the cider bar.  I ordered most of the ciders they had that I hadn’t previously tried.  It appears that most if not all of these are draft-only.

Independent Cider (Dryden WA) Barreled Blackberry Perry (5.9% ABV):  On the sweeter side of semi-dry, with berry, and a hint of oak (barrel), but no detectable pear

I liked the Blackberry Perry, but wasn’t too into the others, mostly as they were on the drier / tart / sharp / bitter side.  I probably should have just ordered something I knew I would like, but I like to try new ciders, especially at the lower price of a taster.  I was more excited about the bottle shopping I did – I picked up a bunch of Dunkertons (an English cider which is a favorite of mine that hasn’t been available for quite awhile) and Alpenfire (a local favorite), plus a few others.

Review of Hemly’s Pear Cider (cider from apple & pear juice).  It is my first time trying anything from this cidery. 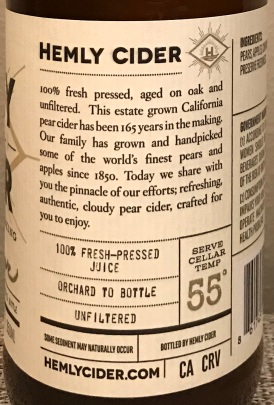 Cider Description:  Our flagship and most popular cider. This pear cider is medium sweet, tastes of fresh pear and has a beer like body. Our Original is made from Bosc and Bartlett Pears and a small amount of Gala Apples, is aged on oak and unfiltered. At 5.5% alc. Hemly Original is bright, refreshing and sessionable.

Cidery Description:  It may have taken us 165 years, but it’s definitely worth the wait! Six generations later, thanks to Josiah, we can share the heart of our pear ciders with you: fermented dry,aged on oak, unfiltered. A light refreshing, authentic and cloudy pear cider crafted for you to enjoy.  Our cider is made from 100% fresh pressed fruit straight from our orchards, never artificially flavored. We control the entire process from the roots to the glass. After six generations of growing pears, we have a gold worth sharing.

Price:  $11.99 / four pack
Where Bought:  Total Wine
Where Drank:  home
How Found:  on a business trip to Southern CA I picked up a number of singles

My Opinion:  I really enjoyed the flavor.  However, it was quite mild overall.

Most Similar to:  Anthem Pear and Longdrop Tanager Pear Cider

Closing Notes:  Hemly also has at least two other pear ciders, Dry, and Sloughhouse (with Jalapeño).

Have you tried Hemly Pear Cider?  What did you think? 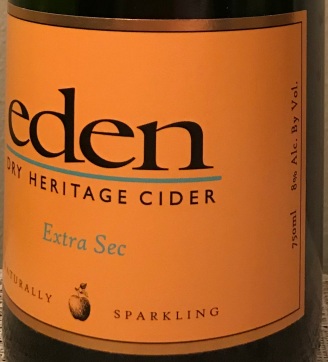 Availability:  limited, although they have online sales

Cider Description:  Champagne-method cider made from heirloom and bittersweet apple varieties grown in Vermont and at Poverty Lane Orchards in New Hampshire. It is naturally sparkling and clean – we hand-disgorge the yeast from every bottle! Beautifully balanced between fruit, acid, and tannin. The barely perceptible dosage serves to bring forth the fruit character of the cider. Perfect with roast pork, turkey and vegetable gratin dishes.

Cidery Description:  Our specialty ciders reflect the cold winter climate and apple heritage of Northern New England. We make ciders that are unique and innovative, but that also respect the rare and expensive apples we use, and refrain from aggressive manipulation and industrial beer and wine processing techniques.

Price:  ~ $15
Where Bought:  their website
Where Drank:  home
How Found:  browsing

My Opinion:  I enjoyed it, especially as it isn’t fully dry, and has some complexity, but this isn’t my favorite style of cider.  My husband was predictably even a big fan, as its a favorite style of his.  I recommend this to fans of complex dry tart sparkling ciders; its very well made and an excellent value.

Most Similar to:  Eden Harvest cider, but sparkling, a touch drier, and more complex

Closing Notes:  Awhile back Eden replaced their flagship ‘Dry’ and ‘Semi-Dry’ ciders with ‘Brut Nature’ and ‘Extra Sec’, all of which are sparkling, with the former at 0% residual sugar and the later (reviewed here) at 0.9% residual sugar.  I think I preferred the ‘Semi-Dry’ a bit over Extra Sec, as it was a touch sweeter and richer, but anything from Eden is a good choice.

Have you tried Eden Extra Sec?  What did you think?

Diverging a bit from cider, this is a review of Superstition Meadery’s Hawaiian Honeymoon, a pineapple-vanilla mead.  Mead is made by fermenting watered down honey.  It is my first time trying this one, but I sampled a number of Superstition’s varieties when I visited their tasting room (see here). 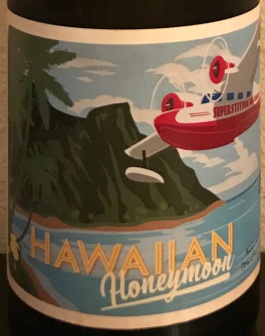 Availability:  limited; see here, plus they have online sales

Mead Description:  Hawaiian Honeymoon is a recent Superstition creation which has become an instant staff favorite. Big juicy Tahitian vanilla beans and pineapple, aged on toasted American oak staves, join forces with Arizona honey in this delicious craft beverage that will take you on vacation.

Meadery Description:  We have introduced over 200 unique meads and hard ciders since 2012.
Our products range from dry to sweet, still to sparkling, and easy drinking to the most flavorful beverage you have ever imagined.

Price:  ~ $24
Where Bought:  unknown
Where Drank:  home
How Found:  my husband got me this (and 1 other Superstition mead) for Christmas 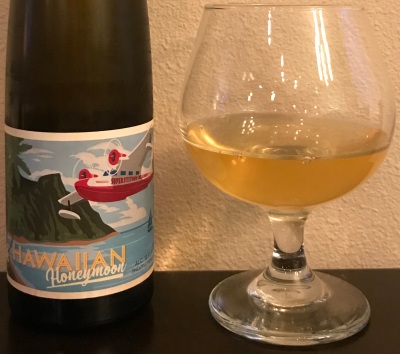 My Opinion:  I enjoyed it.  It was more pineapple than honey forward, and the vanilla was barely perceptible.  I see mead as a nice option in between cider and wine, and although there are more sessionable (low ABV) mead options, which often tend drier, I usually prefer the more traditional sweeter higher-ABV meads, which tend to be full-flavored.

Most Similar to:  High-ABV pineapple cider, or pineapple wine, with a hint of honey.

Closing Notes:  Superstition’s meads are at the higher end of the price spectrum, but they are also high quality.

Have you tried mead?  What did you think? 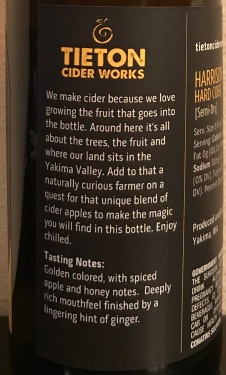 Cider Description:  This is our second cider in our single varietal series. We use Harrison apples it in our ciders often because its great for blending with other apples, but since it makes such good cider on it’s own, we chose too make a single variety cider. It is golden colored, with spiced apple, honey notes and a deeply rich mouthfeel finished by a lingering hint of ginger.

Cidery Description: From our orchards to your glass, TCW controls every aspect of the growing and cidermaking process. TCW boasts the largest orchard of cider apple varieties in Washington state and the largest Perry pear orchard in the United States. We blend our cider fruit with all Washington apples. We’ve been growing apples, apricots, cherries and pears on Harmony Orchards – our family farm – since the 1930’s and are thrilled to be involved in Re:interpreting the tradition of cider making.

Where Bought:  Total Wine
Where Drank:  home
How Found:  initially at a tasting event

Tasting Notes:  On the sweeter side of semi-dry.  Light to medium bodied.  Moderate tartness and acidity.  Hints of bitterness and tannins.  No sourness or funk.  Notes of heirloom & green apples, honey, pear, lemon, and an overall flavor which I would best describe as creamy.  Moderate length tart finish.  Moderate apple flavor, sessionability, overall flavor intensity, and complexity.

My Opinion:  I enjoyed it.  Very approachable for an heirloom apple cider, as many tend towards super dry and tart.  Its at a nice price point too.

Most Similar to:  Snowdrift Forefathers and Locust Honey Pear

Closing Notes:  I always like finding ciders from heirloom and/or cider apples which are a bit sweeter, as I’m not usually into fully dry ciders, but like their flavor and complexity.

Have you tried Tieton Harrison?  What did you think?

Review of 2 Towns Branch & Barrel, an Imperial-style cider made from heirloom apples, then barrel aged.  It is my first time trying this, but I’ve had most of their line-up (see here). 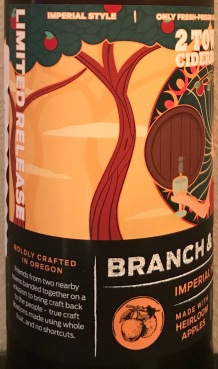 Cider Description:  Pomona, goddess of orchards, blessed our crop this year with a bounty of eclectic heirloom apples which, when fermented & aged in French oak foeders, yield a deliciously aromatic cider fit for the gods!

Cidery Description:  At 2 Towns Ciderhouse we believe that the long history of cidermaking demands respect and deserves to be done right. Starting with the highest quality whole ingredients from local farms, we take no shortcuts in crafting our ciders. We never add any sugar, concentrates or artificial flavors, and instead use slow, cold fermentation methods to allow the fruit to speak for itself. As a family-owned company, we are committed to the growth of our team and enrichment of our communities. We take pride in producing true Northwest craft cider.

Price:  $6.99
Where Bought:  Total Wine
Where Drank:  home
How Found:  browsing; I was surprised to see this on shelves vs. usually receiving samples of their new releases in the mail (they did however send me an awesome holiday gift – a bottle of their Pommeau!)

My Opinion:  I liked it, especially because they went a bit sweeter with this one than their others and its flavor profile.  It tasted sweeter than it smelled.  My husband was also a fan, especially due to it being Imperial-style (higher ABV), which is his favorite.

Most Similar to:  Tieton SV Harrison and Snowdrift Forefathers

Closing Notes:  2 Towns is always a good choice, as they make so many different varieties of ciders, and they are all pretty middle of the road, to appeal to the masses.

Have you tried 2 Towns Branch & Barrel?  What did you think?