Review of 1763 (Revolutionary West Country Cider) from Cider Riot! from Portland OR.  This is the first bottled cider I’ve had from Cider Riot!, although I had their Never Give an Inch Oregon Blackberry on tap recently. 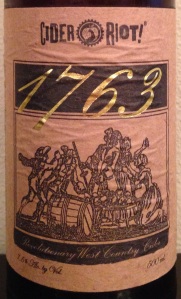 Cider Description:  Our tribute to those who stand up against the status quo, 1763 commemorates the year of the Cider Riots in the English West Country, when cider lovers rose up and overthrew the nefarious Prime Minister Bute who imposed a tax on cider. 1763 is inspired by the West Country ciders that warranted such passion. Yamhill County grown Yarlington Mill, Harry Masters Jersey, Dabinett, & Kingston Black apples lend robust tannins, and rich flavours to a cider that’s worth fighting for.  Ranked #2 in the Traditional Apple Category in Sip magazine’s Best of the NW competition 2015.

Cidery Description:  Cider Riot! is an urban cidery located in a detached garage off East Burnside Street in Portland’s North Tabor neighborhood dedicated to the production of dry ciders. We use a variety of apples grown in Cascadia, including rare English and French cider variety apples, wild apples from Yamhill County, Oregon, and dessert apples from the Yakima and Hood River Valleys.

Price:  $12
Where Bought:  Schilling Cider House in Fremont neighborhood of Seattle WA
Where Drank:  home
How Found:  Browsing.  This was a new release they had at the cash register.  Actually it was this year’s release, as this cider actually launched July 2014.  Here is a press release from NW Cider on this year’s release of the 2014 vintage of 1763. 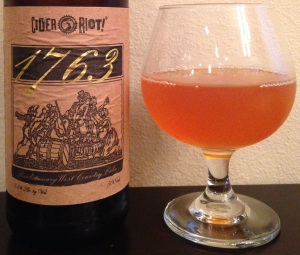 Opinion:  Dry to semi-dry.  High tannins.  Moderate to high astringency.  Moderate bitterness.  Low to moderate acidity.  Mild sourness.  Earth, yeast, and wood notes.  Very mild funk.  Full bodied.  The flavor of the cider finished quickly, but bitterness lingered at the back & sides of my mouth.  I found the bitterness overwhelmed my palate and didn’t let the full richness of the cider apples shine through.  I think if the bitterness was decreased and/or the sweetness was increased it would have been a more balanced cider.  I also found it to be alcohol-forward, with a warm burn (it is 7.5% ABV though).  Oddly enough this cider had some of the flavor characteristics of being barrel aged, but it wasn’t.  I recommend drinking this cider between fridge and room temperature, as it mellowed a bit as it warmed up.

Most Similar to:  High tannin ciders (such as English-style), including Alpenfire Ember, Traditions Bourbon Barrel 2012, Whitewood Kingston Black, and Liberty English-Style, all of which I tried at Cider Summit Seattle 2015 (tasting notes here), and Worley’s Premium Vintage.

Closing Notes:   Unfortunately this cider was too bitter for my liking.  I think fans of high tannin ciders who don’t mind bitterness would really enjoy this one however.  Its commendable they were able to make a cider using only local cider apples, which are rare and expensive.  I also believe that this cider would have greatly benefited from cellaring…I wish I had given it a year or two before drinking, as it likely would have mellowed out some of the bitterness.  However, it appears they  already aged this cider a year, as it was noted the 2014 vintage was released this year.  I look forward to finding another variety to try from Cider Riot! that might be more to my liking.

Have you tried anything from Cider Riot?  What did you think?