Review of Aspall’s English Imperial Cider.  I’ve previously had their Dry and John Barrington varieties, which are impressive.  Aspall has got to be one of the oldest cideries out there, founded in 1728!  Aren’t their tall bottles awesomely distinctive?  Note that it appears this cider has since been switched to a light blue label (similar description and same ABV), but I don’t have confirmation. 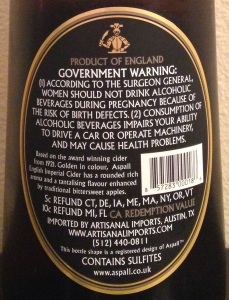 Availability:  Semi-wide release.  If you can’t find it locally, you can actually get it for $7 from ShipCider.com, which ships to a number of states.  Shipping can be spendy, but their cider prices are the lowest I’ve seen, so overall its not too bad, especially considering you can pick up ciders you normally don’t have access to.

Cider Description:  We called this cyder Imperial in honour of our great grandfather JB Chevallier’s success at the Imperial Fruit Show in 1921. Every year we craft a special vintage. This is our 285th….Rich fudgy, tantalising flavour enhanced by bitter-sweet apples from a single year’s crop. Notes of raisins, dates and prunes. Sweet mellow finish.

Cidery Description:  Our family cyder-making business was established in 1728 by Clement Chevallier. He planted the orchards at Aspall Hall in Suffolk. The Chevallier family still live and work among Clement’s orchards and today Aspall is run by the eighth generation of the family….Aspall has been home to our family for nine generations. A tiny hamlet north of the small market town of Debenham in mid-Suffolk. It’s a rural and agricultural area characterised by the young river Deben flowing through our orchards.

First Impression:  Rich amber.  No carbonation except for a few bubbles on the border of the glass.  Smells like rich ripe apples, tannins, oak, earth, and a hint of spice and honey.

Opinion:  Between semi-dry and semi-sweet.  Lovely rich full-flavored English cider.  Warming from the slightly higher ABV, but doesn’t taste boozy.  Moderate tannins.  No to low bitterness and tartness,  Low acidity.  No sourness or funk.  Medium bodied.  Medium length finish.  Still (no carbonation).  Tastes oaky (but isn’t barrel aged as far as I know) and has some caramelized sugar notes.  I particularly enjoyed the lack of bitterness and that the level of tannins was noticeable but not extreme.  I can definitely taste the bittersweet apple character.  From their website I also learned they use champagne yeast on all their ciders.  I found this cider’s taste didn’t too significantly change as it warmed up, so I’d recommend anywhere between fridge and room temperature, based on your preference.  My go-to cider pairing is pretzel bread, and it didn’t disappoint!

Most Similar to:  Other English ciders, such as Aspall, Worley’s, and Sheppy’s, English-style ciders such as from Liberty Ciderworks (English Style and its barrel aged cousin, Stonewall) & Montana Ciderworks (Darby Pub), and higher tannin ciders such as Cider Riot 1763, Alpenfire Ember, Traditions Bourbon Barrel 2012, and Whitewood Kingston Black.

Closing Notes:   Awesome!  Probably easily in my top 10 favorite ciders, and my favorite Aspall variety so far (although their others are also awesome).  This cider is the epitome of my favorite qualities in a cider.  Its also a great value, at approximately the same cost as a lot of local craft ciders I see, many of which are made from dessert apples and have flavors added (fruit, hops, spices, etc), when this is imported and contains some cider apple juice.  Aspall makes some amazing ciders, and I look forward to trying more.  Their website it super informative on their history, cidermaking, and more, so check it out.  I highly recommend their ciders!  That said, its all a matter of taste…if you prefer a lighter flavor and easy drinking / low ABV / sessionable cider, this isn’t it.

Have you tried Aspall Imperial?  What did you think?