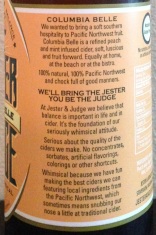 Availability:  likely only WA & OR

Cider Description:  We wanted to bring a soft southern hospitality to Pacific Northwest fruit.  Columbia Belle is a refined peach and mint infused cider, soft, luscious and fruit forward.  Equally at home, at the beach or at the bistro.  100% natural, 100% Pacific Northwest and chock full of good manners.

Cidery Description:  We’ll bring the Jester and you be the Judge.  At Jester & Judge we believe that balance is important in life and in cider.  It’s the foundation of our seriously whimsical attitude.  Serious about the quality of the ciders we make.  No concentrates, sorbates, artificial flavorings, colorings, or other shortcuts.  Whimsical because we have fun making the best ciders we can featuring local ingredients from the Pacific Northwest, which sometimes means snubbing our nose a little at traditional cider.

Price:  ~$2.50 for a single bottle (runs $8-9 for a four pack)
Where Bought:  Total Wine
Where Drank:  home
How Found:  Browsing, although I had heard about this variety online

First Impression:  The first half of the bottle poured a hazy orange-pink straw yellow (pictured above).  The second half of the bottle had a crazy amount of sediment and poured a murky brown hue.  Very low carbonation.  Smells like peach, citrus, tropical fruit, mint, and a hint of apple.

Tasting Notes:  Semi-dry.  The flavor starts with a refreshing & fruity peach with hints of citrus, followed up by a cooling mint finish (the mint was less pronounced when there was more sediment).  Low tartness and acidity.  No sourness, bitterness, funk, or tannins.  Medium bodied.  Moderate length finish.  Moderate apple influence.  High sessionability.

My Opinion:  I liked this better than their American Apple and Sharp Cherry (it was more flavorful), but overall the flavor combination with the mint wasn’t really to my liking (plus generally I don’t go for fruity ciders).

Most Similar to:  I’ve had a few peach ciders, such as from Blue Mountain, Finnriver, and Black Fin.  I’ve also had a few herb-infused ciders, such as Finnriver’s Lavender Black Currant, Honey Meadow, Cranberry Rosehip, & Solstice Saffron, One Tree Lemon Basil, and J.K.’s Scrumpy Farmhouse Summer.  I’ve even had Woodchuck’s Mint cider.  However, I haven’t seen this combination before.

Closing Notes:   Columbia Belle was very refreshing and would be nice on a summer afternoon.

Have you tried Jester & Judge Columbia Belle?  What did you think?