Review of Cockrell Original Hard Cider from Puyallup WA.  They started making cider in late 2014, and so far I have only previously tried their Valley Red (raspberry).  Here is an article on their release. 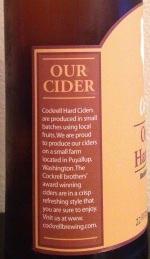 Cider Description:  This is the cider that started our journey. Our Original is a semi-sweet cider made with local fruit. We age this cider for months to bring out a smooth taste with just the right amount of tartness. Our Original is a crowd pleaser and winner of many competitions including the Cascade Cup and Washington State Fair.

Cidery Description:  Cockrell Hard Cider is the longtime dream of two Puyallup brothers, Richard and John Cockrell. The brothers have been making hand crafted beer and cider for over 25 years. Their creations have won many local, state and national awards and accolades resulting in the encouragement of friends and family to consider sharing their creative talents with a larger audience.

As the brothers began planning for their retirement, they contemplated turning their hobby into a second career. The Pacific Northwest is home to many quality microbreweries but few artisan cider houses. The sophisticated range of flavors crafting ciders offers provides the brothers with the experimentation and creativity they crave.

The brothers began formulating a plan which included searching for the perfect cider apple. For over 100 years the Puyallup Valley, has been an agriculture leader in Washington State. The brother’s quest brought them to Gwyndon Farms. The farm was established in 1967 by Don and Gwendolyn Dewey. The Dewey’s operated the family farm for decades growing apples, cherries, raspberries and rhubarb. At its peak, the farm had over 1500 apple tress offering two dozen varieties.

They have a tasting room open Fridays and Saturdays on their farm in Puyallup WA.

Where Bought:  Full Throttle Bottles in Seattle WA
Where Drank:  home
How Found:  Browsing, although I had heard of them online and tried their Valley Red (raspberry) twice. 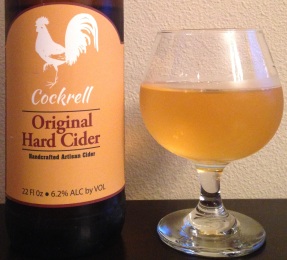 My Opinion:  This cider was definitely to my liking.  It has more flavor than a lot of flagship ciders and is reasonably priced too.

Most Similar to:  Richer ciders, such as those from Brittany France (like Celt, although Cockrell has significantly lower carbonation), and Cascadia Ciderworks United Dry.

Closing Notes:   This was a very enjoyable cider.  I’m curious what else from them I’ll like.

Have you tried Cockrell ciders?  What did you think?