Review of Atlas Cider Company’s Session Cider.  I’ve tried most of their lineup (see here).  This is their newest release, their first canned cider, and their first available in a multipack. 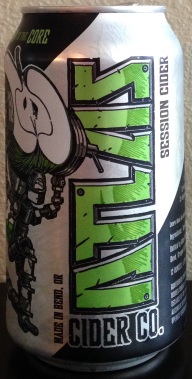 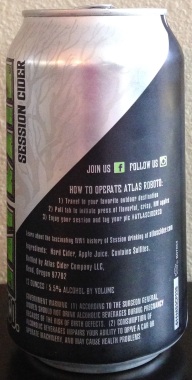 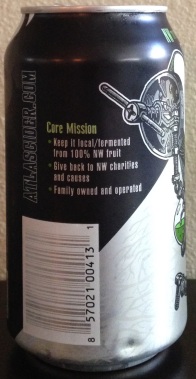 Availability:  Year round in ID, OR, NV, and WA.

Cider Description:  During WW1 British legislation limited drinking to 2 sessions, lunch from 11am-3pm and evening from 7pm -11pm. During these 4 hour sessions workers wanted a highly drinkable beer with a lower abv, around 4-5%, so they could return to work without being drunk and disorderly. Some workers are said to have up to 8 pints per session. A true session drink also does not necessarily mean it will have less flavor like a light beer. We are aware that our session cider does contain 5.5% abv; this is above the threshold of a session beer, but being a cider it is still significantly lighter, just as flavorful, and more drinkable than other craft ciders with higher ABV’s. Thus we thought our apple in 6 pack-cans was the perfect “session cider” Enjoy.

Cidery Description:  ATLAS Cider Co. produces authentic hard cider fermented from 100% fresh pressed fruit from our region. Partnering with Northwest farmers to source our fruit has been a priority of ours from the beginning. Our ciders start with a base of NW fruit that are pressed to achieve a balance of sweetness, tartness, and dryness. We forge our ciders in the heart of the NW in Bend, OR.

Price:  <$2 / single can (retails for $10.99 / six pack)
Where Bought:  Special Brews in Lynnwood WA
Where Drank:  home
How Found:  I had read about its release through Atlas Cider Co.’s Facebook page, but this was the first time I saw single cans available, so I picked one up. 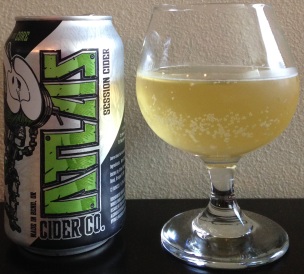 My Opinion:  One of my favorite sessionable/canned ciders so far.  It is more flavorful than many are, probably as it is a bit on the sweeter side, and was back sweetened (but avoids the overly apple juice flavor which I’ve often found).  For being medium bodied, it still tasted very light (probably due to its crispness and light flavors).  It also had some nice complexity and flavor notes, which surprised me.  I also found it lacked the watered down type flavor which I often taste with similar ciders.

Closing Notes:   I wouldn’t mind keeping this cider in the fridge.  Session Cider is a probably a close second to their Apricot as far as my favorite Atlas cider.  The only thing I would change is to increase the carbonation.

Have you tried Atlas Session Cider?  What did you think?