Review of Bereziartua’s Sidra Natural.  This is my first time trying their cider, although I’ve tried a handful of other Spanish Sidra varieties (pronounced see-druh, cider in Spanish).

>>This is a review of a sample bottle provided to Cider Says by Scoperta Importing / The Marchetti Company (the importer).  Although I will take care to treat it the same as any other review, there is always the potential for bias as I received it for free.  The only consideration I knowingly made was pushing this up in my cider review cue.  I love free stuff, especially cider!  Want your cider or cider-related product reviewed here?  Contact me.<< 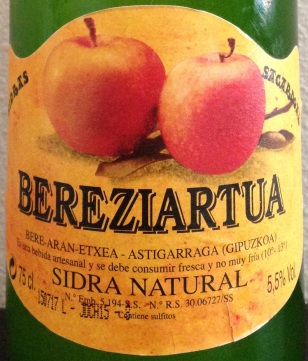 Production:  Freshly picked apples are crushed and pressed.  The freshly pressed juice is put into kupelas (large neutral wood barrels) where it ferments for five months.  This traditional cider is 100% natural.  Apples are the only ingredient.

Tasting Notes:  This cider is unfiltered and slightly effervescent.  The aromas are peach and orange blossom, with a bouquet of yeast, and the tart apple flavor finishes in a burst of minerals.

Serving Suggestion:  Traditionally, Basque cider is poured from a bottle held head high into a glass held mid-thigh.  A small portion is poured and the cider aerated as it hits the glass.  It should be consumed in one gulp and poured again.

Cidery Description:  Sidras Bereziartua Sagardoak is a family-run firm devoted to cider production since 1870.  That was when we made the first Bereziartua ciders at our old installations in Ergobia. A century later, in 1970, our cider house finally committed itself to the production of sagardua or cider at its installations in Astigarraga, where we are located today.  Since then, and following various modernization processes, Bereziartua has become a beacon in the production of natural cider, while at the same time preserving its family character at the service of tradition, and out of respect and gratitude towards our loyal customers.

Side note – I did not do a traditional Spanish pour.  Truthfully I had enough trouble getting the bottle open!  (plus unless you have a lot of experience, doing a long pour, it is likely to be wasteful)  This Sidra didn’t seem to require the aeration as much as some others though.

My Opinion:  Although its growing on me, I’m not a huge fan of Spanish Sidra.  I was able to share the remainder of the bottle with some friends who better enjoy this style.  I did enjoy this the most of all the Sidras I have tried however (I found it more flavorful and the sourness less harsh).

Most Similar to:  Other Spanish Sidras

Closing Notes:   If you enjoy Spanish Sidra, American farmhouse-style cider, sour beers, etc, than this is a well-made budget-friendly selection I’d recommend.  If you are thinking of trying one for the first try, this is a decent choice (although its not the mildest, it isn’t the harshest, and I think it has a nice flavor).

Have you tried Spanish Sidra?  What do you think of them?