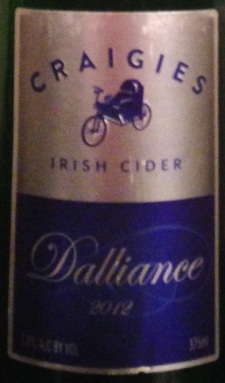 Cider Description:  2012, a dry sparkling cider, it is pale green in colour, light-medium bodied with a mixture of fresh citrus and green apple flavours and a touch of fennel. It is more akin to a sparkling wine in texture and flavour than a traditional cider and possesses the same palate refreshing qualities. Dalliance is the second blend in the Craigie range of ciders and as the name suggests is a playful flirtation with what each vintage has to offer. This vintage is a blend of dessert apples and is very different in style to the Ballyhook Flyer. It was released later than the Ballyhook Flyer as it spent fifteen months on its fine lees in order to develop and enhance its aromatic qualities. Like the Ballyhook Flyer it is a sparkling cider that is very refreshing with a long, complex finish. Dalliance is a great match for dishes such as charcuterie, turbot or creamy Irish cheeses such as Cooleeny.

Cidery Description:  Welcome to Craigies Cider, Irish craft cider made in County Wicklow, the Garden of Ireland.  7 varieties, 6 growers, 5 counties: 100% Irish. From seed to tree and from soil to season our aim is to express the unique characteristics of Ireland’s magnificent apple orchards. No added water, no added sugar, just pure apple juice, passionately crafted into fine, complex ciders.  We make our ciders using the juice of 100% pressed, Irish-grown apples and never from concentrate. Our ciders are vintage – we make them once a year – vegan, naturally gluten free, and made from apples grown in some of the best orchards in the world. 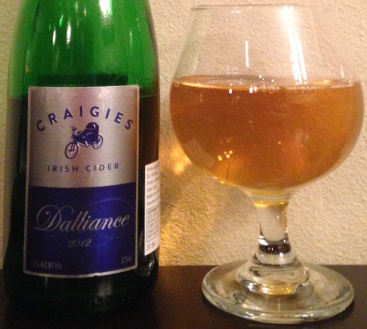 My Opinion:  I thought this was ok, albeit underwhelming.  I was expecting more complexity, but I guess especially since it is made from dessert apples I set the bar too high.  From my tasting notes on their Ballyhook Flier cider, I actually found that one more complex (and drier, more tannic, and more bitter).

Most Similar to:  Semi-dry apple juice-forward simple ciders, such as Elemental Carbon.  Comparing Dalliance to the other Irish ciders I’ve had, this was actually more similar to Magner’s than Cragie’s Ballyhook Flyer, Dan Kelly’s, or Longueville House Cider, as it wasn’t overly complex (although it remained drier and more craft tasting than Magner’s).

Closing Notes:  I’m curious if this is a cider which is better drank fresh, as my tasting experience differed from the description (and some other reviews).  However, it appears this cider was released fairly recently, probably 2015 (not 2012), so that isn’t too old.  I’ll have to give it another chance sometime.  Interestingly enough they only make the two varieties, Ballyhook Flier and Dalliance, and I’ve now tried both.

Have you tried Cragie’s cider?  What did you think?