Review of Worley’s Special Reserve, a keeved English cider (a process more common with French cidre, and which makes a naturally sweet and sparkling cider).  I previously tried this at Cider Summit Seattle 2015 (see here), but wanted to give it another go.  I’ve also tried Worley’s other two ciders which are available in the U.S., Premium Vintage and Mendip Hills. 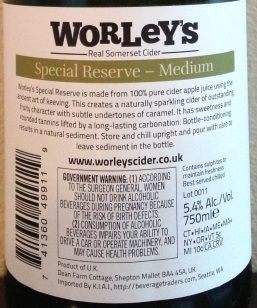 Cider Description:  Worley’s Special Reserve is made from 100% pure cider apple juice using the ancient art of keeving.  This creates a naturally sparkling cider of outstanding fruity character with subtle undertones of caramel.  It has a sweetness and rounded tannins lifted by a long-lasting carbonation.  Bottle-conditioning results in a natural sediment.  Store and chill upright and pour with care to leave sediment in the bottle.

Cidery Description:  A hobby that got out of control.  We first made cider as a bit of fun for ourselves and our friends. Now here we are nearly a decade later and we’re still having fun but we’re making a lot more cider!  Our first experience of making was when we bought 50 gallons of juice off the farm press from the iconic Roger Wilkins in Mudgely, Somerset. We made the mistake of adding in a bit of sugar and ended up with 10.5% cider. It was lethal and one of the neighbours spent a few hours in a ditch as a result of downing a couple of pints.  Lesson learned, we began to find our own fruit in various small Somerset orchards and gradually started to master the mysterious arts of fruit selection and fermentation.  A few years ago we decided if wanted to carry on making cider we’d need the cider to start making a contribution to its upkeep. So we gradually started selling a bit. Now we’re making over 30,000 litres a year and don’t have time to have proper jobs any more!

Price:  $16.99
Where Bought:  The Cave in Kirkland WA
Where Drank:  home
How Found:  initially at Cider Summit Seattle

My Opinion:  I enjoyed this.  It has an interesting mix between lightness and richness.  However, I would have liked less funk (although the quality has grown on me in the last couple years).

Most Similar to:  A cross between English and French cider, which are both favorites of mine.

Closing Notes:  I’ve been in a big English cider mood lately, but the selection of them has decreased in the Seattle area oddly enough (seems like the imports don’t move very quickly, so the shops haven’t been re-ordering them).  My favorite Worley’s cider so far is Mendip Hills, which had all the flavor without the funk.

Have you tried keeved cider?  What did you think?