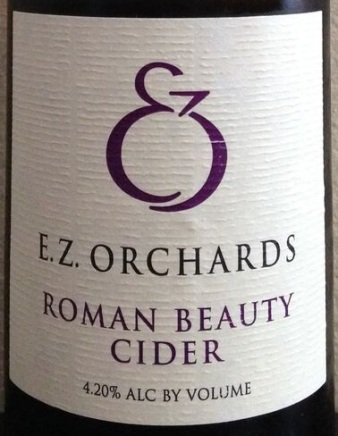 Availability:  Likely only in California, Oregon, and Washington

Cider Description:  Roman Beauty Cider is named for the heirloom apple that provides the predominant juice pressed for this blend.  We have been growing this apple variety at E.Z. Orchards since 1929.  Fermented cold and slow to retain a ripe apple aroma, Roman Beauty is a semi-dry cider with mild acidity.

Cidery Description:  We have been orchardists since the 1920s when we began to grow Roman Beauty apples on the farm. When we began specifically producing cidre apples in 2000, the entire orchard was transformed around that intent and slowly took shape. Surrounding the orchards, the larger farm produces a wide variety of fruits that diversify the land and aid in the pollination process, including peaches, pears, and hazelnuts.  Today, we grow a wide variety of heirloom cidre apples including French and English bittersweets, and American semi-sharps. In the Willamette Valley of Oregon where we farm, the ground is an ancient seabed full of rich and nutritious soil. With so much nutrition available to the trees, we have to suppress their vigor through pruning and selection to ensure that each apple receives the most intense nurturing for flavor and aromatics.  We grow our apples with specific cidre blends in mind. As you walk the grounds, it becomes clear that it’s organized around specific cultivation and harvesting techniques, enabling us to manage a precise maturation on the tree that we improve with every year’s lessons.

Price:  $9.00
Where Bought:  Schilling Cider House in Seattle WA
Where Drank:  home
How Found:  I first tried this when some friends bought a bottle at the cider house and shared some with me.

My Opinion:  I really like this cider.  However, this batch was quite different than what I tried a couple years ago; that time it was completely clean, and this time it was significantly funky.  However, batch variability and funkiness are to be expected when using unpredictable spontaneous (wild yeast) fermentation.

Closing Notes:  I hope to be able to try more ciders from EZ Orchards.  However, they seem to be getting more difficult to find in the Seattle area.

Have you tried cider from EZ Orchards?  What did you think?