Review of Kystin’s Cuvée XVII, a French cidre.  The “XVII” refers to the 16 apple varieties plus a 17th ingredient, chestnuts.  I’ve previously tried their Opalyne.

>>This is a review of a sample bottle provided to Cider Says by French Cider Inc. / Beauchamp Imports.  Although I will take care to treat it the same as any other review, there is always the potential for bias as I received it for free.  The only consideration I knowingly made was pushing this up in my cider review cue.  I love free stuff, especially cider!  Want your cider or cider-related product reviewed here?  Contact me.<<

Cider Description (translated):  After seven long years of experimentation, a maceration of chestnut, raw, crushed, for many months in the juice will finally be retained to tie apple and chestnut: La Cuvée XVII is born!  Today, it offers us a particularity and unique flavor, amazing Chefs and Sommeliers of very beautiful establishments, honoring the Gastronomy and knowing how to put forward the difference.  Its sublime amber color, its tuberous nose, its attack very fresh honeyed apples gradually gives place to the flavors of Chestnut and its notes of undergrowth.  There is also the creamy chestnut, cocoa and floral notes very intense.

Cidery Description:  Created in 2012, Kystin offers a range of original and very unique gourmet ciders, made of unusual ingredients such as chestnuts, pears and ginger. With a history dating back to the 14th century, Kystin ciders combine fruit, tradition and authenticity to create an unforgetabble taste. The brand recently released “Kalysie” – a pear ginger cider named as a tribute to the Khaleesi character from popular TV series Game of Thrones. 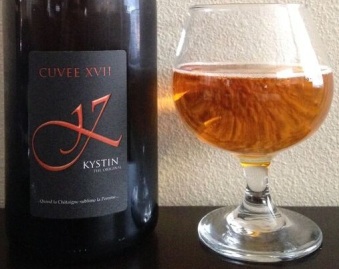 My Opinion:  Excellent!  I love the uniqueness of this cider.  Quite complex and flavorful.  Probably the most tannic French cidre I’ve ever had, which I enjoyed, and the nuttiness paired perfectly.  Also less sweet than I was expecting for a Demi-Sec, which makes it quite versatile.  I drank this at cellar temperature (in between fridge & room temps), which the cidery recommended, and I agree with.

Most Similar to:  I’ve actually tried two Chestnut themed ciders, an English cider aged in a Chestnut wood cask (Sandford Orchards Chestnut Cask), and a cider with Chestnut crabapples and aged with toasted oak spirals (Number 12 Chestnut), but neither were with actual chestnuts.  The most nutty cider I’ve had was an English Perry from Hogan’s, but again, no nuts.

Closing Notes:  Next up is Kystin’s Kalysie, a perry (100% pears) with ginger.  So far I’m quite impressed, especially considering this is a relatively new cidery (2012), especially in comparison to the age of many other French cideries which have been around for generations.