Kevin & Mark Van Reenen, brothers and co-founders of Neigel Vintners (NV) Cider out of Wenatchee WA, were nice enough to answer my request for an interview.

The following are their answers in response to my interview questions.  The only changes I have made were formatting and some added information on upcoming cider events indicated with brackets.  All photos in this article are from NV Cider’s Facebook page and NV Cider’s website, as everything is better with pictures.  Enjoy!

(1) What was your inspiration in starting NV Cider?

We have a deep respect for the fruit that fostered our valley especially for the pears we grew up tending with the family.

(2) I understand that the company is named after your grandfather, Sylvester Neigel, and that “Vintners” is a name for a wine maker/merchant.  Why did you choose to use a wine descriptor for your perry company name?

We always knew we wanted to keep the Neigel name going somehow as our grandfather just had two daughters.  When considering what to use with Neigel we thought vintners worked well for two reasons…first the word itself connoted craft beverage to us and secondly, from early on, we knew that we wanted to shift into NV Cider.

(3) Were you interested in cider/perry any time before taking over your grandfather’s pear orchard, or was that the first time?

There were a couple of trips to the UK that really enhanced a love of cider that we had engrained for many years previous to that.

(4) When developing a new variety, what is your process?  ie. Do you go in wanting to yield a certain flavor profile, is it from playing around with new methods & ingredients and finding something you like, or something else?

By in large, new varieties are quite calculated and in direct response to customer feedback and market analysis.  Hoppin’ Pear was a unique convergence of market opportunity and making something that the two owners really wanted to be able to drink themselves

(5) My favorite of your perries that I’ve tried is what appears to be the sweetest one, Pear Essentials (I guess I have a bit of a sweet tooth), which I find to have a very pear-forward flavor more than anything I’ve tried (even other back sweetened products).  Do you have anything extra to share about that variety, such as how it was developed?

That product is our flagship and has enjoyed more attention than any of our other flavors.  It received more versioning and refinement than anything we’ve done as we really wanted something true to pear flavor and as far from artificial as possible.

(6)  Some folks would go so far as to say that back sweetened cider/perry isn’t “craft”; do you have an opinion on that?

I would actually argue that it is more craft.  The finished product doesn’t get to be complete after just a careful fermentation and settling.  When that is done it takes more work which includes careful ‘blending’ to introduce its own pre-fermentation juice at the right time and quantity to bring a really natural flavor.

(7) Do you have a favorite perry that you make?

One owner prefers Hoppin’ Pear as the best of beer and the best of cider and the other owner is still a fan of the first one we ever made which is a small batch single varietal run that is available only in September most years…Half Past Prudent. 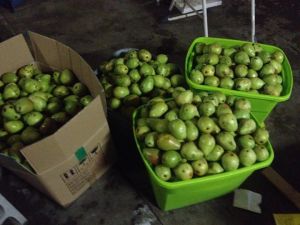 (8) Do you have any favorite ciders or perries?

Absolutely, the two main offerings from Left Field Cider Co. in BC.  Whenever we have a chance to head over the border our first purchases are Little Dry and Big Dry.  Plus the cider makers are super fun.

(9) Your new packaging looks awesome!  The use of metal bottles is quite unique.  Did you hire a designer, or did you have a pretty good idea of what you wanted when you went to the label & bottle manufacturer?

Very early in our studies of the market environment we stood in front of the cider cooler at Chuck’s Hop Shop in Seattle and wondered which one we should start with.  It was right there that we committed to never using an amber color 22oz glass bottle.  We knew exactly what we wanted when we stipulated the exact pantone color and bottle dimensions to the manufacturer.  The over-all marketing has been one of our favorite parts of the endeavor.

(10) Are there any different considerations for bottling in Aluminum instead of Glass?  What was the reason you went that way (uniqueness, to protect the product from UV list, etc)?

A few factors include the ability of aluminum to help with the cooling of the product.  The colder our perry is when it’s served, the more the pear flavor jumps forward. Uniqueness was another pro but actually a con that we considered was the fact that aluminum wouldn’t show off the refreshing light green color of the beverage.  In the end it was a pretty easy decision to go with those bottles even though they are significantly more expensive than any other options we found.

Without a doubt we would love to have one as soon as possible.  We have already started the ball rolling on purchasing the exact property we want and have lots of ideas for the finishings.  Having recently received some huge orders, the tasting room is unfortunately further toward the back burner than we would hope.

(12) What is your marketing strategy / target market?

Although we have a higher end product with the pear base, we want this alternative to more sugary substitutes in consumption to be approachable by a broad market base.  We have done and are doing everything possible to allow us to continue selling our products at a reasonable price point so that as many people as possible can enjoy our passion.

(13) What changes have you noticed in the Washington cider/perry scene lately?

Luckily we have seen cider take over more tap handles at on-premise locations which is definitely moving cider in the right direction.  As for perry, we are still enjoying being one of only a few companies nationwide that do only perry.  We have had the opportunity to educate many accounts on the difference between pear cider and perry.

(14) Will NV Cider be at any upcoming tasting events in Washington such as Cider Summit?

You bet, in the next couple of months we will be at:

(15) Should we expect any new varieties soon?

We are debuting Cherry Perry at the Seattle Cider Summit.  This is a mature version of one of the first flavored ciders we tried years before becoming a company when we were just hobbying.

Our approach of providing flavorful perries without added refined sugar is a backbone of the company and will drive our growth for years to come.

Thanks again to Kevin & Mark Van Reenen from Neigel Vintners (NV) Cider!  I look forward to checking out their new Cherry Perry variety at Cider Summit Seattle.  I’ll also have to try Left Field Cider Co. (if I can find some), as that is the second recommendation I’ve seen for them.