Review of Kupela’s Basque Cider, from France.  It is my first time trying anything from this cidery. 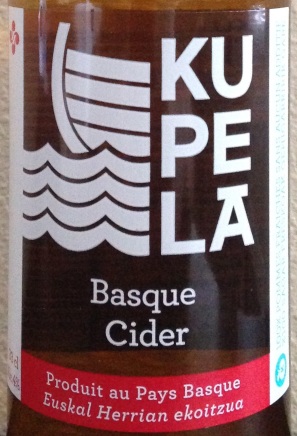 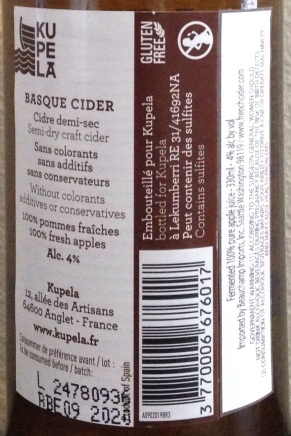 Availability:  In Washington, through Beauchamp Imports, plus online at their French Cider Inc. website (at the time of this review, they are able to ship to WA, OR, ID, CA, NV, NM, AK, ND, NH, & DC).

Cider Description:  From the Basque region, this distinctive cider is tasty, tangy, smooth yet expressive. Cellar master, Agustin Etxeberria has created this modernized version of traditional Basque cider – making it light, but dry and slightly tangy, with subtle effervescence.  The fleeting hint of sweetness, is balanced immediately by the acidic cider apple flavors. 100% natural and 100% refreshing. Fermented in the bottle, try this is a real alternative to beer.

Cidery Description:  Located in the Basque region of northern Spain, Kupela cider is produced using traditional Basque methods. Kupela pays tribute to the Basque sailors who embarked on lengthy sea voyages with cider in barrels (“Kupela” in Basque), rich in vitamin C to fight scurvy.  Its acidity, its lightness and its fruitiness match perfectly with the gastronomy acclaimed by modern Epicureans. 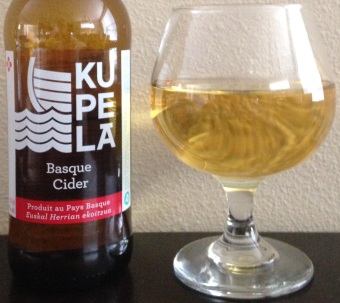 My Opinion:  I really enjoyed it.  Not at all what I was expecting from a French or Basque cider, but in a good way.  I’m not typically a fan of Spanish Basque cider due to the sourness, but it was absent.  This may be the first French Basque cider I’ve tried though.  It would be a fun cider to bring to a party, as its qualities remain crowd-friendly (not sour, bitter, or funky, and mid-level sweetness), plus it has some nice complexity.

Most Similar to:  not any French or Basque Spanish cider I’ve tried, but an Italian cider, Bertilinos, except even more complex

Have you tried Basque French cider?  What did you think?