Here is a review of a French cider, Celt Cidre Breton Traditionnel: 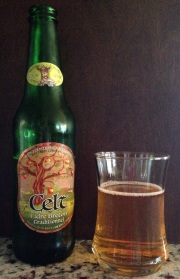 Description:  Cider has sparkled in Brittany since the Iron Age, when Gaul warriors roamed the ancient land named “Armor” or “Country-by-the-Sea.” They worshiped the sun, the moon and the stars and feared nothing but the sky falling on them. Celt cider is named after these proud and fearless warriors who lived in the six Celtic nations known as the “Celtic Crescent”: Brittany, Cornwall, Ireland, Scotland, Wales and Isle of Man. This is a refreshing “demi sec” cider with a fruity flavor balanced by a crisp dry finish made from the finest apples in Brittany. Authentic and traditionally made hard cider imported from Brittany.  100% fermented apple cider not from concentrate.

Price:  $2.50 for a single bottle
Where Bought:  Whole Foods
How Found: Browsing.  This was a random find.  The unique bottle caught my eye as I hadn’t seen it before and have never tried French cider.
Where Drank:  home

Opinion:  I’d classify this on the sweeter side of semi-dry.  It reminds me of the two English style ciders I’ve tried, Crispin Browns Lane and Aspall Dry Cider.   For some reason these three ciders remind me of barrel aged ciders, which is probably a reason why I enjoy them.  Of the three I’d probably give a slight edge to the Crispin Browns Lane.  I find it very refreshing, with hints of caramel, honey, and vanilla.  It has an effervescent mouth feel.  It doesn’t however have much complexity and finishes quickly (sweeter start and drier finish).  At only 4.5%, this is also a very easy to drink cider.  I’m curious if I could find this in multi packs, as that would likely be more affordable.  It appears that I can get Loic Raison Brut cider in a 750ml bottle at Total Wine, so I’ll have to see if that is the same thing, but at $10.50 that is actually more expensive.  This cider makes me want to try more English & French ciders, as long as they are not too dry.  Quite tasty!

Closing Notes: This cider is made from Breton apples and is described as a traditional French cider, described as Brut or demi sec (medium dry).  I unfortunately don’t have any additional information on the cidery, as it was difficult to find anything online in English besides some Untappd & RateBeer reviews.  Have you tried Celt Cidre Breton Traditionnel, or any other French ciders?  What did you think?