Review of Reverend Nat’s Winter Abbey Spice, “apple wine with raisins and spices”.  Its a seasonal New England Style spiced cider (marketed as apple wine as it is over 7% ABV).  This appears similar to Reverend Nat’s Providence, which is also a New England Style spiced cider, but has a lower ABV.  At first I thought they were the same, as the store actually stuck a barcode label on this one saying “Providence”, but it appears not.

By the way, New England Style cider is typically considered a barrel aged strong cider (8-12% ABV) which underwent a secondary fermentation with additional sugars and raisins.  So, Winter Abbey Spice meets that definition except its a tad low on the ABV.

Availability:  Winter time, where Reverend Nat’s cider is sold.  It appears this occurs in OR, WA, Southern CA, parts of ID, AK, British Columbia, Japan, & Singapore, and online at InsideTheCellar.com and ShipCider.com (although I didn’t see this variety on either website).

Cider Description:  Our good friends in the North counteract the bitter chill of winter with this traditional drink, but in flavor, bold in character, made with raisins, unrefined cane sugar, cinnamon & nutmeg and fermented to dryness with oak.  This tipple is sure to warm your bones.

The apples for this cider were from Kiyokawa Family Orchards.  It was aged in oak for 6 months.

Cidery Description:  Reverend Nat is a single-minded cider evangelist who searches the world for superior ingredients to handcraft the most unusual ciders that no one else will make.

Nat West (who is actually an online ordained minister) has been making cider since 2004, started Reverend Nat’s in 2011, and opened a tap room with 12 taps in Portland in 2013 (which also includes bottles and selections from other cideries).

Price:  $12.99
Where Bought:  Total Wine
Where Drank:  home
How Found:  This was recommended to me, so I was on the look out for it.  At first I thought it was the same as Providence as that is what the label from the store said and I remembered Providence being a New England Style spiced cider, but it appears the recipe and ABV is slightly different.  I had passed on Providence as the whole raisins and spices thing sounded weird.  However, I’m now more open to spiced ciders, and apparently raisins aren’t all that uncommon to add to ciders (New England Style is a thing and raisins were traditionally used as their wild yeast would ferment the cider, and they add some sweetness, alcohol content, flavor, color, and tannins). 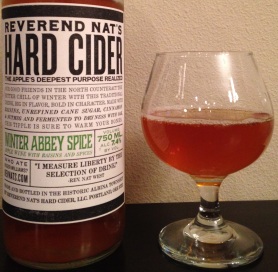 Tasting Notes:  Semi-dry.  Low acidity, tartness, and sourness.  A touch of bitterness and funk.  Mild to moderate spice (mostly cinnamon).  Lovely rich flavor with lots of burnt caramel and brown sugar notes.  The oak is barely noticeable.  I only picked up raisins in the scent, not the flavor.  Medium bodied.  Long finish.  Full flavored.  Low sessionability.

My Opinion:  This was pretty tasty, but the slightly sour thing was off putting to me.  The sourness wasn’t overt, and took me awhile to figure out what I was picking up.  However, reading online reviews, I can’t find anyone else noting it was sour, and I’m the first to admit I’m sensitive to it, so I imagine most folks wouldn’t notice at all.  My husband said this was in his top 5 favorite ciders at least (he samples everything I open).

Most Similar to:  Other high ABV spiced ciders (such as 2 Towns Nice & Naughty, although that is 10.5% ABV) and New England Style ciders.  I don’t think I’ve tried a New England Style cider before, but at least a few exist in the current craft cider market (such as from Blackbird and Headwater).  Apparently its fairly popular for home cidermakers too.

Closing Notes:   I can see why this cider is popular.  It wasn’t really my thing, but was nice to try.  I’m not opposed to trying another New England Style cider though.

Do you have a favorite spiced cider?