For the eighth book review here at Cider Says (see here for the first seven):  “Tasting Cider, The CIDERCRAFT Guide to the Distinctive Flavors of North American Hard Cider”, by Erin James, published July 2017, paperback, retailing for $19.95 ($13.45 on Amazon).  Erin James is the editor-in-chief of CIDERCRAFT magazine (the first and only print magazine in the U.S. focused on cider) as well as Sip Northwest magazine. 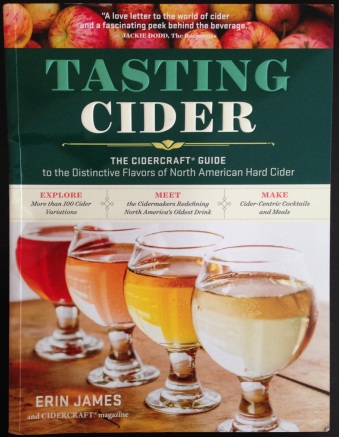 >>This is a review of a sample copy of the book provided by the book’s publisher, Storey.  Although I will take care to treat it the same as any other review, there is always the potential for bias as I received the products for free.  The only consideration I knowingly made was pushing this up in my review cue.  I love free stuff, especially cider!  Want your cider or cider-related product reviewed here?  Contact me.<<

The book is split into four main parts:

And The In Between:

There is a book launch party in Seattle WA at Seattle Cider on September 14, 2017.

“Tasting Cider” would be a great addition to any cider enthusiast’s book collection!  It has a little bit of everything (but has a focus and stays on point), which is sure to please any cider enthusiast.  I haven’t had a chance to sample any of the cider cocktails or recipes yet, but I want to give them a try.