Review of Angry Orchard’s newest regular release, an unfiltered less sweet version of their Crisp Apple.  It is my first time trying this, but I’ve had a number of their other selections (see here). 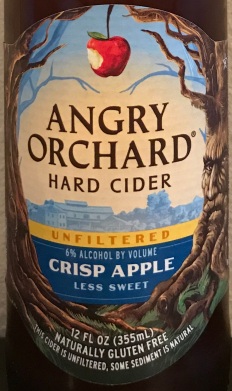 Cider Description:  Crisp Apple Unfiltered is an homage to traditional cider with a natural, less sweet, fresh apple taste.  It is made with bittersweet apples, the gold standard in cider making.

My Opinion:  The weird chemical flavor ruined it for me, and my husband agreed – we ended up dumping it out.  Maybe it had gone bad, but it didn’t taste like ciders I have had before which were truly flawed (the most common I’ve found is those which have turned vinegary).

Most Similar to:  Angry Orchard Easy Apple, Crispin The Saint, and some favorites of mine, Downeast Original Blend and 2 Towns Return of the Mac, except with a chemical twist…ick

Closing Notes:  I was hoping this would be a full-ABV version of their Easy Apple (their less sweet, less filtered, low ABV cider), but that one is much better.

Have you tried Angry Orchard Unfiltered?  What did you think?