Skip to content
HomeNeigel Vintners (NV) Half Past Prudent

Here is a review of a perry from Nieigel Vintners (NV) Cider, Half Past Prudent. 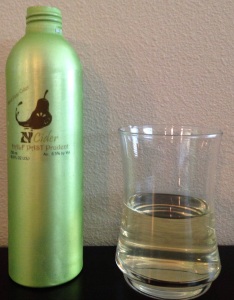 Description:  This was our first cider.  We originally created it to be a light cider we could drink all summer long.  Wanting to eschew the sugary summer beer alternatives, we created this for its simplicity.  The name comes from our first trial runs before the idea of a company was even formed.  Our 1902 press would produce this cider.  We would crank the press until we heard it start to creak and pop…a prudent place to end the press.  We would then crank it around one more half turn.  We take our virtues with a grain of salt.

Price:  $2.75 for a single bottle (the store split up the 4 pack)
Where Bought:  Full Throttle Bottles in Georgetown (Seattle)
How Found: Browsing, noticing it after having tried their Pear Essentials variety
Where Drank:  home

First Impression: This cider is fairly pale, slightly cloudy with a small amount of sediment.  I pick up a citrus and mild pear scent.  My first taste is tart and fairly dry.

Opinion:  This is an interesting perry;  It breaks the mold of the fairly sweet varieties that are more common and that I’ve tried previously (Crispin Pacific Pear, Fox Barrel Pacific Pear, Spire Mountain Pear, Woodchuck Pear, Wyder’s Dry Pear, and even NV Cider Pear Essentials).  I think the main difference is that this is 100% fermented pear juice, no apple juice, and no back sweetening, which is what is typically offered.  This is more semi-sweet than sweet.  I don’t notice any carbonation.  I pick up an earthy lemony green apple champagney taste.  It is very smooth, but a bit too tart, dry, and even slightly bitter for my taste.  I really like the idea of it though, as I often like a slightly earthy & champagney cider.  I think it is mostly the tartness?

I first tried their perry at Snohomish on the Rocks, where I had Pear Essentials, which I prefer.  So, I guess I am not a cider traditionalist, as I often like the added flavor & sweetness from back sweetening done right (I don’t like ciders that tend towards syrupy).  If you are looking for a sweet but not too sweet very pear-like perry, than I’d recommend Pear Essentials.  Hopefully I can find that variety again.  I bought a large clear glass bottle of their Pear Essentials variety at the event, but this time their product was sold in a small metal canister (less than 9 oz).  Their newer packaging is pretty sweet looking, where the canister is more bottle-shaped…likely very eye catching in the sea of bottles & cans on the shelves!

Closing Notes: NV Cider offers five types of perry:  Half Past Prudent, Cider Baron, Pear Essentials, Pearfect Pie, and Forgotten Virtue.  Here is an interesting profile piece on NV Cider in Cider Craft Magazine.  Have you tried any perry from NV Cider?  What did you think?