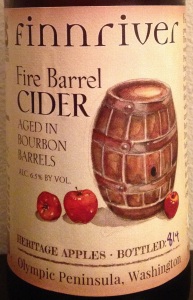 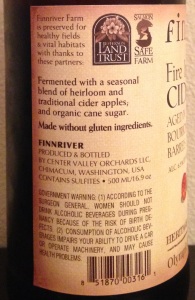 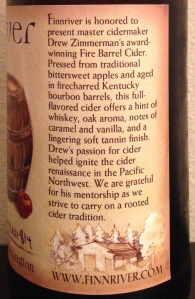 Cider Description:  Finnriver is honored to present master cidermaker Drew Zimemrman’s award-winning Fire Barrel cider.  Pressed from traditional bittersweet apples and aged in fire charred Kentucky bourbon barrels, this full-flavored cider offers a hint of whiskey, oak aroma, notes of caramel and vanilla, a lingering soft tannin finish.
Drew’s passion for cider helped ignite the cider renaissance in the Pacific Northwest and now, here at Finnriver, we are grateful for his mentorship as we strive to carry on a rooted cider tradition.  Made with a seasonal blend of heirloom and traditional cider apples.

The label has “814” handwritten after “Bottled:”…it looks like this may indicate a bottling date of August 2014, although I only bought this a few months ago.

Cidery Description:  At Finnriver we gather and ferment the flavors of the land to offer you farmcrafted hard ciders and spirited fruit wines. We are inspired by the allure of the fruit, the ancient history of the craft of fermentation and the lively traditions we now seek to revive.  Our mission is to inspire a deeper connection to the land that sustains us….Some of these ciders are small-batch, seasonal and labor-intensive. Others are produced with contemporary methods and more readily available year-round…Finnriver grows over twenty varieties of traditional and heirloom apples in our organic orchard, to feature in our traditional and specialty ciders.  They have a tasting room open seven days a week, noon to 5pm, and are on the Olympic Pennsylvania cider route along with Eaglemount and Alpenfire cideries.

Price:  $11?
Where Bought:  Special Brews in Lynnwood WA
Where Drank:  home
How Found:  Browsing.  I tried this a couple years ago and didn’t like it oddly enough.  Then I had it again at a Capitol Cider tasting with Bill Bradshaw and nine WA cideries (notes here) and really enjoyed it.  I imagine my tastes had changed since the first time I tried it, as then although I enjoyed barrel aged, I wasn’t into higher tannin ciders.  I had actually bought the bottle before the tasting, as I wanted to give it another try now that this type of cider is my favorite. 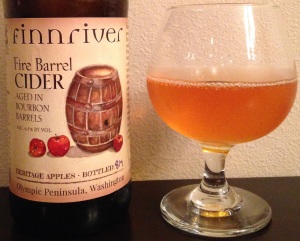 Opinion:  Semi-dry.  Ripe apple, caramelized sugar, bourbon, oak, earth, smoke, and vanilla notes.  Lovely bittersweet apple flavor.  Although I picked up rum oddly enough in the scent (probably as I got a hint of spice), the flavor is more bourbon/whiskey, and I don’t pick up any spice.  Moderate to heavy tannins.  Low acidity.  Low bitterness.  Low tartness.  Very light funk (more earthiness than anything else).  Mild to moderate barrel influence.  Mild to moderate spirit influence.  Pretty much still (no carbonation).  Medium bodied.  Moderate to long finish.  It start off with the tannins, then mellows out quite a bit.

Most Similar to:  Other tannin-forward ciders.  This reminds me of English style cider, but there is the added nice barrel & spirit flavor.

Closing Notes:   Awesome!  I really enjoyed this cider–one of my favorites, and definitely my kind of cider.  Bold and unique.  It definitely isn’t an introductory type cider (although still less harsh than for example Sea Cider Prohibition / Rumrunner and Alpenfire Smoke, which I also really enjoy), but is a great example of what can be made when you use cider apples and barrel age.

Have you tried Finnriver Fire Barrel?  What did you think?

One thought on “Finnriver Fire Barrel”