As a continuation of my trip report on the Port Townsend cider route, here is post 2/4, on Alpenfire Cider (see here for post 1/4, an overview).  It was our first cidery of the day, just after they opened at 11am, and we were the only customers.  This was good as instead of their Red Wine & Chocolate & Cider event pairing, I was offered the option of partaking in their regular tasting (which I chose, then I sampled some of the chocolates!). 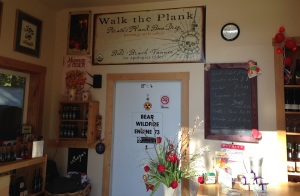 Alpenfire Cider is owned & operated by the husband & wife team of Steve (Bear) and Nancy Bishop.  They started under the name Wildfire but changed to Alpenfire in 2010.  The name is a nod to Bear’s firefighting background.  They live on the property with their orchard, cidery, and tasting room.  Their orchard is primarily made up of English and French cider apple varieties (although they have recently planted some heirloom apple and perry pear varieties).  They were the first certified organic cidery in Washington and had their first harvest in 2008.  I learned that currently all of their ciders which have the USDA Organic seal are made from apples from their own orchard, and those that don’t are from other orchards.  They also produce a line of vinegars.

<it was a beautiful day!>

I had met Nancy at a few events for Washington Cider Week last year, including Cider Summit Seattle, and she actually remembered me!  I had hoped they would have some bottles of Smoke, which I think is my favorite from them (amazingly rich & smokey), but alas their next batch is still barrel aging.  Their last batch was 16% ABV, made from Kingston Black, Dabinett, & Vilberie apples, and triple fermented in charred oak whiskey & mead barrels.  No estimate on when the next batch will be released as it takes as long as it takes until they are completely happy with it. 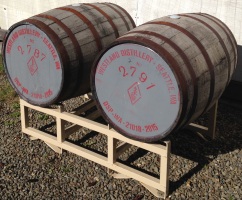 They had an interesting cider tasting order, from sweet to dry to sweet.

Spark – Their semi-sweet cider, a customer favorite, made from cider and heirloom apple varieties, and their most “American” cider.  Semi-sweet to sweet.  Low acidity and tartness.  A hint of tannins.  Honey and floral notes.  Medium to full bodied.  Moderate finish length.  This would be a great introductory artisan cider for folks used to drinking commercial cider, due to its sweetness (and it was for me).

Dungeness Orchard Blend – A unique still (non carbonated) cider made from over 200 varieties of apples from the Dungeness Orchard in Sequim WA.  It can almost be better compared to white wine, such as Sauvignon Blanc, than cider.  I was also told that due to the number of apple varieties used, it can be a bit “volatile”, varying batch to batch (some past batches have been significantly sweeter).  Dry to semi-dry.  Slight funk.  Light bodied.  Low tartness.  Moderate acidity.  Light tannins.  Complex with floral and mineral notes, but otherwise I find the flavor difficult to describe.  Long finish.

Pirate’s Plank – Their flagship award winning “bone dry” (zero residual sugar) cider, described as similar to traditional English cider.  Aged in white oak.  This is a “Scrumpy” unfiltered and unpasteurized cider.  It was said that this could be used similar to a sour beer in food pairings.  Fully dry.  Low acidity and tartness.  Moderate tannins.  A hint of funk.  Light bodied.  Citrus, floral, oak, and earthy notes.  Long finish.

Glow – A single varietal rosé cider made from Hidden Rose red fleshed apples, which are unique for Alpenfire as they are actually a dessert apple variety (not heirloom or cider apple variety).  These are rare in the U.S. as the majority are shipped to Japan, where they can fetch $12-$15 per apple!  They tried to grow these in the Alpenfire orchard, but they weren’t thriving in the cool climate, so now they source them from Oregon, where the variety was discovered in the 1960s.  The cider is a lovely blush color.  It smells very fruity, of watermelon and strawberries.  Sweet.  Complex and fruity.  Very full flavored.  Low tartness and acidity.  Medium to full bodied.  Nearly still.  Moderate length finish.

Cinders – This is their newest release, a Methode Champenoise version of Glow, and a very limited release of 454 bottles.  Methode Champenoise is an old world labor-intensive way of making a naturally carbonated champagne-style cider.  It involves secondary fermentation in the bottle, daily hand turning of bottles on a riddling rack, and manual disgorging of the residual yeast sediment.  Semi-dry.  Very high carbonation.  It smells more yeasty than fruity to me.  I was surprised how dry the Methode Champenoise made it.  The flavor seemed mild, especially compared to Glow.  A completely different cider. 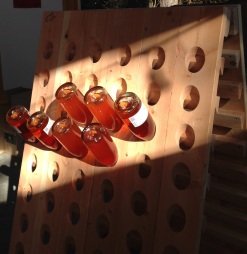 Calypso – This is their only cider which has an addition besides apples, blackberries from Sequim WA.  Pippin apples from their orchard were used, and the cider was aged 2 months in Bull Run Distilling rum barrels.  Semi-dry.  Low to moderate tartness.  Very light oak barrel influence.  Low to moderate blackberry flavor.  Light bodied.  Moderate carbonation. 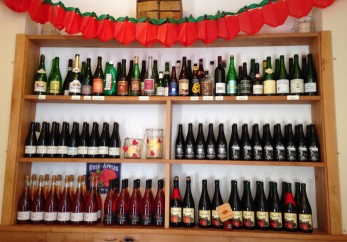 I had tried Spark, Ember, and Dungeness previously (as well as Apocalypso, a twist on Calypso that was aged 4 instead of 2 months, and Simple Cider, which were both draft-only releases).  Its crazy how much tastes can change (and ciders, year to year), as the first time I tried Dungeness I really wasn’t a fan…it tasted like dry white wine to me.  Now that my cider palate has expanded I could taste the complexity of the cider.  Even last summer I remember Ember as being too tannic for my tastes, but now it was enjoyable.  The only cider of their current lineup I haven’t tasted yet is now Flame, a Methode Champenoise style cider.

I picked up a bottle of Glow and a cute Alpenfire t-shirt.  I was expecting to purchase a bottle of Cinders, but honestly I preferred Glow.  I can get Glow at home (but not Cinders, although it is currently on VinoShipper), but its no fun to leave a tasting room without cider!  It was my favorite from this tasting.  Overall my favorites from them are Glow, Spark, Smoke, and Calypso/Apocalypso.

Stay tuned for posts 3/4 and 4/4 on Eaglemount and Finnriver!