As a continuation of my trip report on the Port Townsend cider route, this is post 3/4, on Eaglemount Wine & Cider (here is overview post 1 and here is post 2 on Alpenfire).  It was our second cidery of the day.  Eaglemount is unique in that they also offer red grape wine and mead (honey wine) in addition to cider.  All of these are made by the co-owner Trudy.  It was quite busy, but I got a chance to chat with her and introduce myself.  I learned that Drew Zimmerman from Red Barn Cider in Mt Vernon WA was an inspiration in their making cider, wine, and mead.  Red Barn Cider closed a few years ago due to his retirement.  Its not the first time I’ve heard of Drew Zimmerman…his Fire Barrel cider is now made by Finnriver (who also bought his cider apple orchard).

Eaglemount is owned & operated by the husband & wife team of Jim & Trudy Davis, since 2006, although they had been making these beverages for 10 years prior to that.  They moved their tasting room just over a year ago from their home, orchard, & cidery/winery/meadery to a separate property (the Palindrome).  I learned they often start their ciders fermenting with wild yeast, then may add yeast as required.  There is an Airbnb on the new property, and plans for a new septic system and commercial kitchen so they can host events.  At their orchard they are planting 800 cider apple trees to add to the current 200.  They currently use cider apples in a mix with dessert apples in their Dry & Semi-Sweet Homestead ciders.

One of the disadvantages of visiting during an event was they were offering less tastings for a higher cost (due to the chocolate pairings), and they were served in plastic cups (for some reason cider always tastes better from a glass to me).  I went through two sets of four tastes at Eaglemount.  My husband also sampled some of their red wines.

The cider & mead tasting options that day were Homestead Dry cider, Homestead Semi-Sweet cider, Cyser, Quince cider, Rhubarb cider, Raspberry cider, Raspberry Ginger cider, Ginger cider, Apple mead, Cherry mead, Cranberry mead, Quince mead, Apple Dessert Wine, and Harvest Apple wine.  The last two were described as apple wines as they had higher ABVs.  I believe the only cider from their lineup that wasn’t offered was Boot Brawl, their hopped cider.  Bottles of cider & mead ranged from $14-$26 (mostly $14-$16), and most bottles are 750ml.  They also had 5 red wines they were tasting out of the 6 in their lineup. 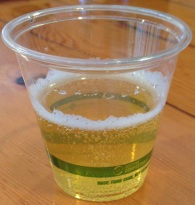 <this brand of environmentally friendly mini plastic cups is quite popular, also used at Finnriver and at several other cider events I’ve been to; I later learned that the county requires the two tasting rooms to use disposable drinkware as they have not yet met certain requirements such as water use and septic monitoring history–quite interesting>

Homestead Semi-Sweet Cider, 8% ABV – This is the sweeter version of their Homestead cider, also available in Dry.  Smells likes sweet apples with a touch of honey.  Slightly hazy.  Semi-sweet.  Moderate carbonation.  Medium bodied.  Low to moderate tannins.  Low tartness and acidity.  Yeasty, slightly rich, similar to English cider, but with a touch of honey notes.  Moderate finish length.  I liked this much better than their Homestead Dry that I tried at Cider Summit, as it didn’t have as much tartness or bitterness.

Rhubarb Cider, 8% ABV – Cider with organic rhubarb.  Smells tart and fruity.  Described as semi-sweet but I found it semi-dry.  Low carbonation.  Light bodied.  Low to moderate tartness.  Moderate acidity.  Fruity notes, although I’m not sure I could have identified them as rhubarb.  A touch alcohol-forward.  Long finish length.

Apple Mead, 10% ABV – Mead (made from honey from Sequim WA) with apples.  I’m not sure how this varies from their cyser (which is also made from honey and apples).  Smells mild, of apple juice and honey.  Semi-sweet.  Medium bodied.  Mild acidity.  Moderate tartness.  A hint of bitterness.  A hint of tannins (apple skin flavor).  Notes of apple, honey, and pollen.  From memory I think this has more apple flavor and a higher ABV than their Cyser, which I prefer.  Moderate finish length.

Cherry Mead, 10% ABV – Mead (made from honey from Sequim WA) with Organic cherries.  Deep red hue.  Sweet.  I only picked up cherry notes, not honey, and they tended towards medicinal.  However, my husband really enjoyed this one.  I think at a lower ABV I may have liked it better.  Alcohol-forward.  Medium bodied.  Long warming finish.

Harvest Apple Wine – This is a new release for them, described as a dry wine crafted from heirloom apples and wild yeast.  They had planned to blend it, but liked it on its own.  Semi-dry.  Medium bodied.  Low to moderate acidity and tartness.  Low tannins and bitterness.  Both apple and alcohol forward.  Long warming finish.