Review of 2 Towns Traditions Cidre Bouche, a French-style keeved cider.  This is one of two ciders which they released to start off their new Traditions line.  Their Traditions line will replace their separate Traditions brand and focus on barrel aged vintage cider from heirloom apples.  The other is Riverwood, which I’ll be reviewing next.  Two others will soon be released, Afton Field and La Mûre.  Its my first time trying this cider, although I’ve tried many other ciders from 2 Towns (see here).

Keeving is a special labor intensive process of fermenting the cider slowly, starving it of natural nutrients.  It results in an apple-forward, naturally sweet, lower ABV, and higher carbonation cider.  This is typical for French cidre, but is very rare in the U.S.

>>This is a review of a sample bottle provided to Cider Says by 2 Towns.  Although I will take care to treat it the same as any other review, there is always the potential for bias as I received it for free.  The only consideration I knowingly made was pushing this up in my cider review cue.  I love free stuff, especially cider!  Want your cider or cider-related product reviewed here?  Contact me.<< 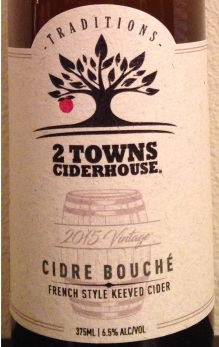 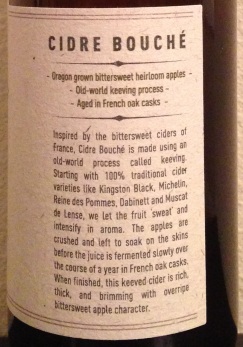 Cider Description:  Oregon grown bittersweet heirloom apples.  Old world keeving method.  Aged in French oak casks….Inspired by the bittersweet ciders of France, Cidre Bouché is made with an Old World process called keeving. We start with 100% traditional cider apple varieties like Kingston Black, Michelin, Reine des Pommes, Dabinett and Muscat de Lense, and then let the fruit ‘sweat’ and intensify in aroma. Next, the apples are crushed and left to soak on the skins before the juice is fermented slowly over the course of a year, and aged in French oak casks. When finished, this keeved cider is rich, thick and brimming with overripe bittersweet apple character. Pairs well with classic French fare— think savory crepes, pork terrine, camembert and blue cheese.

Cidery Description:  At 2 Towns Ciderhouse we believe that the long history of cidermaking demands respect and deserves to be done right. Starting with the highest quality whole ingredients from local farms, we take no shortcuts in crafting our ciders. We never add any sugar, concentrates or artificial flavors, and instead use slow, cold fermentation methods to allow the fruit to speak for itself. As a family-owned company, we are committed to the growth of our team and enrichment of our communities. We take pride in producing true Northwest craft cider. 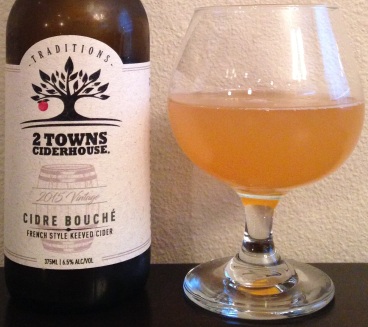 My Opinion:  I really enjoyed it, and thought it paired well with Thanksgiving dinner.  It got a bit funkier as it warmed up, so I preferred it cold.  I’m a fan of these sorts of bold and rich ciders, and of (not too funky or sour) French cidre.

Most Similar to:  French cidre.  It definitely seemed true to the style, in between Normandy and Brittany French cidre as it was a bit funky (as Normandy cidre can tend to be), but not overly so.  However, it was a bit higher acidity and more fruity though (although the grapefruit I picked up might have been more from the high acidity than anything else), which was a nice twist.

Closing Notes:   I look forward to trying the other ciders in their new Traditions line.  I think they made a great choice to release them in smaller 375ml bottles, as it will reduce the price point and increase the number of bottles available.  I also think the switch to keep these under their 2 Towns brand but in a separate category was a smart move.

Have you tried 2 Towns Traditions Cidre Bouche?  What did you think?