Review of Tilted Shed’s Barred Rock.  Its my first time trying this one, but I previously had their Lost Orchard.  See here for a writeup from Cidercraft on Tilted Shed.  I ordered three bottles to be shipped, as their ciders aren’t yet available in Washington. 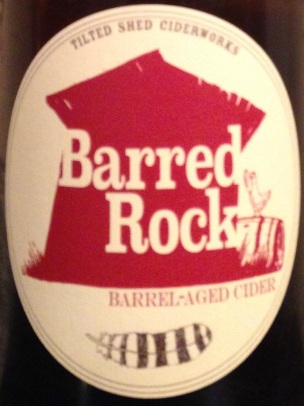 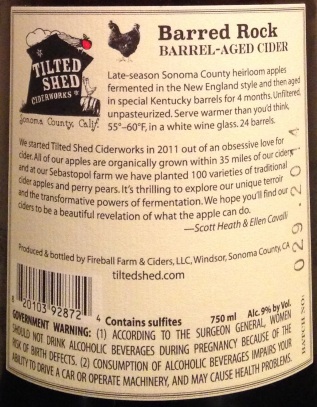 Cidery Description:  We started Tilted Shed Ciderworks in 2011 out of an obsessive love for apples and cider. All of our apples are organically grown within 35 miles of our cidery, primarily in west Sonoma County. At our Sebastopol farm, we have planted 100 varieties of traditional cider apples and perry pears—a pomological research station on the edge of the Pacific. As cider evangelists, we are devoted to making ciders of individuality, integrity, artistry, and elegance. It’s thrilling to explore our unique terroir and the transformative powers of fermentation, and experience how our ciders shapeshift over time. We hope you’ll find our ciders to be a beautiful revelation of what the apple can do.

Price:  $16
Where Bought:  n/a
Where Drank:  home
How Found:  I had read so many good things about their ciders online, and was glad to hear they can ship to Washington.

My Opinion:  I really enjoyed this.  It won’t be for everyone though, as it has an intense whiskey flavor and 9% ABV.  I actually think I liked it better the day after I opened it, as the flavor smoothed out / acidity decreased some.  I had a bit left on a third day though, but I have to say it peaked on day 2.  If I had any criticism, I’d say I’d want a bit more oak flavor (for example, I love the oak in Sheppy’s Oak Matured), a bit less whiskey flavor, and more cider apple than heirloom apple flavor.

Most Similar to:  Liberty Ciderworks Stonewall, and to a lesser extent, Stem Whiskey Barrel Aged Apricot & Carlton Cyderworks Slake & Finnriver Oak&Apple.  However, this is by far the most intense whiskey flavor I’ve tasted in a cider.  Most cidermakers err on the side of caution and keep the barrel and/or spirit flavor on the mild side.

Closing Notes:  This cider is an amazing value!  I have one bottle left – Smoked.

Have you tried Tilted Shed cider?  What did you think?