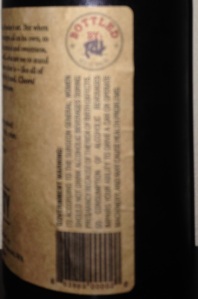 Availability:  Fairly limited.  Per the cidery they currently self-distribute to Spokane and Seattle.  In Seattle, I have seen them at Capitol Cider, Schilling Cider House, Total Wine, Full Throttle Bottles, and Special Brews.  Look for them in bottle shops in WA which specialize in local craft cider.  Liberty’s website lists some locations to find their ciders.

Cidery Description:  Carrying the torch for Artisan Cider. Located in the largest apple-growing region on the planet, Liberty Ciderworks is all about the apple, showcasing the diversity and wonders of locally grown fruit. From well known apples like McIntosh and Jonathan to rare, cider-specific fruit like Kingston Black and Dabinett, Liberty ciders put apples in their proper place: Front and center. We started Liberty Ciderworks in 2013 with a simple, two-part mission: 1) Using apples from local farms and fields, create unique, wonderful ciders, and 2) Share them with friends and neighbors across the great Pacific Northwest. Welcome to the cider revolution.  Cheers!  Rick & Austin

Liberty has a tap room in Spokane and offers over 10 varieties of cider.  Here are links to two articles discussing this cider’s win at GLINTCAP, from Inlander and NW Cider.

Price:  $13.99
Where Bought:  Total Wine
Where Drank:  home
How Found:  I was on the lookout for this variety after reading about it online, as I’m really into barrel aged ciders.

Opinion:  Dry.  Moderate acidity, tannins, bitterness, astringency, and tartness.  Medium bodied.  Long finish.  Rich caramel, vanilla, and ripe apple notes.  The whiskey and barrel notes are mild to moderate.  Note that I don’t like aged spirits at all, but love those flavors in a barrel aged cider.  At first the tannins, astringency, and bitterness were a bit harsh, but as the cider warmed up and I had a few sips, I warmed up to it.  I definitely find some similarities to their English style cider, which is what this cider is, except it was aged in whiskey barrels.  I’m not really sure if I like this one or the English style better…I like the whiskey & barrel notes, but I found this one to have a bit more bitterness.

Most Similar to:  Other barrel aged ciders made from cider apples, such as Traditions Ciderworks Bourbon Barrel 2012 and Whitewood Cider Kingston Black Whiskey Barrel Aged, which I tried at Cider Summit Seattle 2015 (tasting notes here).

Closing Notes:   Tasty!  The price point is also quite good considering this is a craft cider from a small cidery, made using cider apples, is a higher ABV, and was barrel aged.  Another great selection from Liberty Ciderworks!  I look forward to continuing to try their ciders.

Have you tried Liberty Stonewall?  What did you think?