I had tried a number of their tap selections (especially since I was there only the week before), but found six of interest that I hadn’t tried yet.

Schilling Mischief Maker Cran-Pom, 5.8% ABV:  This is a newish cranberry-pomegranate cider by Schilling (available in bottles too).  A bit foamy of a pour.  On the drier side of sweet.  Nice balanced sweet & tart.  However, it was a bit too heavy on the cranberry for my liking, and quite juice-like.

Schilling Barrel #1, 21% ABV:  This is similar to their Barrel #2 I had the previous week, some sort of spirit (not sure if it was distilled or fortified with brandy).  I was able to find out that this one is whiskey barrel aged  However, this was much drier than Barrel #2, on the sweeter side of dry.  It was very very boozy in comparison to Barrel #2.  I really didn’t like it much at all.  It didn’t have nearly as much flavor as Barrel #2.

Moonlight Meadery Boys ‘nd Berries, 6%:  Cherry color.  Boysenberry scent.  On the drier side of semi-sweet.  Moderate tartness.  Kinda boring, but it is one of the better berry ciders I’ve had.  I’ve found I’m just not a fan of berry ciders, as they are often really juice-like.  This cider oddly enough though came across as a bit boozy, tasting higher than 6% ABV, which is unusual for a berry cider.

Rootwood Cider Company Lot 17, 7.2% or 7.5% ABV:  This is the first cider I’ve tried from Rootwood, which hails from the Lake Chelan WA area.  They are newish to cider (launched about a month ago and had a launch party at the Schilling Cider House during Washington Cider Week), but have been growing apples for over 100 years.  They have their own tasting room in Manson WA, which offers growler fills.  They are working on getting their ciders bottled and out to stores, but for now, can be found on tap in the greater Seattle area (such as the Schilling Cider House and 192 Brewing Company in Kenmore).  “Lot 17” refers to the name of one of the family’s original orchard plots in the hills outside of Manson, and it is primarily made using Fuji apples (but also includes Jonagold, Elstar, Foxwelp, Browns, and Kingston Black).  Semi-dry. Fairly simple.  Mild tartness.  Moderate acidity & bitterness.  Light bodied.  It had hints of a rich flavor, and some mild fruity notes, but left me wanting more.  Overall I found this rather boring.

Greenwood Cider Company Huckleberry Wedding Cider, 6.5% ABV:  This is the first cider I’ve tried from Greenwood, which hails from the Seattle WA area.  I hadn’t even heard of them, despite them being local and my interest in cider.  I really couldn’t find any info on them online oddly enough, just a Facebook page, so I e-mailed them.  They are about a year old and currently only sell kegs of their small batch ciders.  In the Seattle area, their customers include Capitol Cider, the Schilling Cider House, and Chuck’s Hop Shop.  I found out this cider was primarily huckleberry, but also included blackberries, blueberries, strawberries, and raspberries (the “wedding” part), and made from piñata, golden delicious, fuji, braeburn, granny smith, and golden russet apples.  It had an orange-pink hue, which was interesting for what I thought was only a huckleberry cider, especially compared to the very dark colored One Tree Huckleberry cider.  I picked up much more citrus (grapefruit?) than berry in it.  Ryan from Greenwood thought I may have been picking up some of the tartness of the raspberries or acidity of the heirloom golden russet apples in detecting citrus notes.  Still, this one was a bit too unique for me, and my least favorite of the seven ciders I ended up trying.  I’m definitely game to try other ciders from them though!

One Tree Hard Cider Huckleberry on Nitro, 6.8% ABV:  Deep deep berry hue.  Excessive foam from the Nitro process and the scent I have come to associate with it.  Very sweet.  I found this to be just your standard juice-like berry cider.  Medium bodied.  There actually wasn’t any perceivable tartness, which was surprising, and would have been welcomed.

All in all I wasn’t impressed with any of my selections.  The Moonlight Meadery Boys ‘nd Berries was probably my “favorite” of the six (actually seven; see below).  They had ciders I really liked still on tap though, such as Moonlight Meadery Last Apple, Schilling Barrel #2, NV Cider Pear Essentials, and 2 Towns Bad Apple & Prickle Me Pink…I just wanted to get ciders I hadn’t tried before. 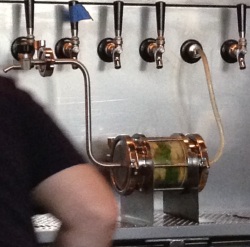 They also ended up putting a Randall together while I was there, which was a cool process to watch.  Apparently they often will do this on the weekend.  It doesn’t appear they charge any extra for a Randalled cider either.  The process appeared to be a seat of the pants sort of thing, with ingredients they picked up from the PCC grocery store down the street.  I had a front & center view of it all too!  They started with Rootwood Lot 17, then added corn, cilantro, and hot peppers to the infuser chamber.

I got a sample of the resulting cider, and it was pretty good!  It mostly had cilantro flavor, with a hint of heat (the peppers were placed at the top of the chamber so the cider didn’t get much of their influence).  I really love Cilantro, so it was nice.  This would have paired very well with Mexican food, which few ciders do (my choice would be Wyder’s Reposado Pear).  I didn’t really pick up the corn in the flavor, but I think it added a bit of color & texture.  You can really see a difference in hue between the pre-Randall Lot 17 (fourth cider from left in flight photo above) vs. the post-Randall Lot 17.

I didn’t have a good view of the cutting board of ingredients, but here is a photo from their Twitter feed: 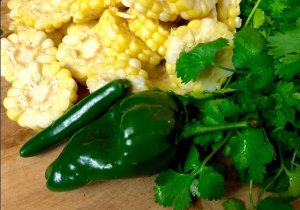 After going to the Schilling Cider House, on my way home, I stopped at the Northgate Total Wine, where they were having a Portland Cider Company cider tasting (4-7pm).  I had spotted it on Total Wine’s event calendar and taken note.  I met their rep Ingrid (whose business card says “cider maven” lol) and tried three of their ciders.  They were pouring Kinda Dry, Pearfect, and Hop’Rageous.  I had tried a bottle of Kinda Dry (review here) and had Pearfect Perry on tap awhile back at my first visit to the Schilling Cider House (tasting notes here), but gave them another go.

Even though I don’t like hops, I thought I might as well try a sip of the Hop’Rageous.  It was surprisingly good!  There was very very little hop flavor, more of an aftertaste.  Apparently they use Citra hops, which are mild, and apparently they didn’t use a huge amount of them.  They also incorporated some orange peel.  Most hopped ciders go quite overboard on the amount of hops.  It had a lovely aroma & flavor of both floral (probably from the hops) and citrus (probably from the orange peel).  I found it dry to semi-dry.  Nice and refreshing, and very light in flavor overall.  I’d actually consider getting a bottle of it, although I imagine I might not like the hops aftertaste when drinking a larger amount.  This is a great example of a well-done hopped cider that even someone who doesn’t like hops/beer can probably enjoy!

As a side note, I’m quite proud of myself for not buying any bottles of cider at the Schilling Cider House or Total Wine, which is unheard of for me.  I have so much cider at home that I can’t justify buying anything but a special release / rare find.