Cider Description:  Cider made from fresh pears grown in the northwest of France, slowly fermented to create refreshing aromas and sweet flavors.  No sugar was added to this well-balanced cider and it is gluten-free.

Price:  $4.99
Where Bought:  Trader Joe’s
Where Drank:  home
How Found:  Browsing.  I had previously tried Dan Armor’s cider, and saw this for the first time.  At $5 it was an easy buy. 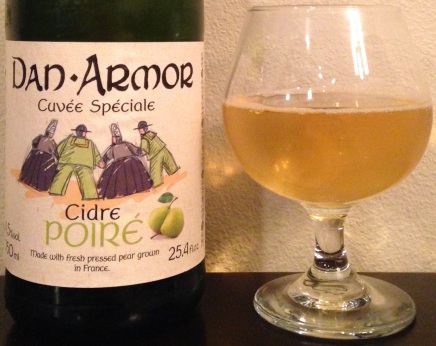 My Opinion:  I enjoyed this.  However, it was definitely on the commercial and easy to drink side, with less complexity than the other poires I’ve had (which admittedly have been from top cidermakers and high end prices to match).

Closing Notes / random thoughts:   (1) Perry has significant unfermentable sugars, so even if completely fermented, it remains significant residual sugar (vs. cider, which with the right yeast will ferment to zero residual sugar).  Therefore you won’t see a dry perry.  Most are semi-sweet.  (2) Here in the U.S., typically the word perry should only be used if the beverage is only made from pears, and the term pear cider if it is an apple cider with pear juice.  However, often pear ciders are mistakenly called perries.  (3) I typically prefer French-style Poire to American perry.  Probably as many of the American perries I’ve had have been funky, and poire often has a really nice texture and complexity while remaining clean.  There have been a handful of American perries I have enjoyed though, like Locust Seckel Perry, Snowdrift Seckel Perry, and fruity perries from Pear UP (formerly NV Cider).

Have you tried French perry (poire)?  What did you think?