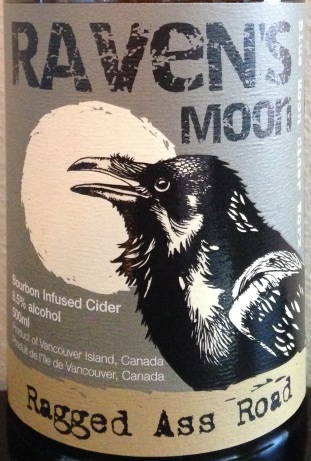 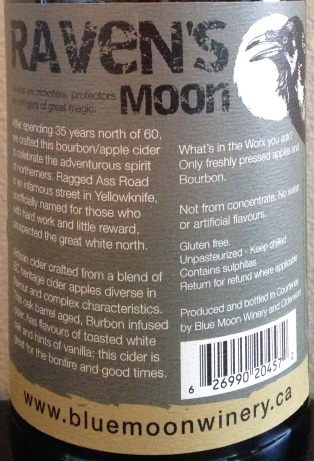 Availability:  mostly British Columbia Canada, plus a few locations in the U.S.; see a list of retailers on their website.  They also have an online store, although it wasn’t clear where they can ship to.

Cider Description:  Who wouldn’t love this? Named for a famous street in Yellowknife, where proprietors George and Marla have spent a lot of time, this is a combination of delightful Raven’s Moon apple cider carefully infused with rich golden Kentucky straight Bourbon. It’s a fabulous marriage of crisp dry apple with toasted white oak, rustic smoke and vanilla hints of this special whiskey. Rich, flavourful and savoury – this is a cider for bonfires and good times!

Cidery Description:  At Blue Moon Winery and Ciderworx we grow, gather and ferment the flavors of the land to offer you hand-crafted award winning spirited fruit wines and sparkling ciders. Our inspiration comes from the scrumptious organic fruits collected from Vancouver Island, the ancient history of the craft of fermentation and the lively traditions we now seek to revive. Our award winning fruit wines and ciders are crafted from 100% BC organic fruit, picked at the peak of the harvest and created in small batches.

They have a tasting room in Courtenay British Columbia.

My Opinion:  I liked it.  However, I would have preferred some richer flavor notes with the bourbon flavor (like vanilla and caramel), but as this appears to be bourbon infused not bourbon barrel aged, it made sense.  As-is, the flavors didn’t quite seem to go together.  It wasn’t as sharp as their other two ciders I’ve tried though, which I liked.

Most Similar to:  Big B’s Grizzly Brand and Virtue Cider The Mitten multipack

Closing Notes:  This was one of a couple dozen ciders I picked up last September on a cruise, and I still have a number of them left; hopefully I’ll finish them before this September’s cruise.

Have you tried Raven’s Moon cider?  What did you think?