Review of La Chouette Cidre Rosé, a French rosé cidre, made from apples (including red-fleshed) and pears.  It is my first time trying this, but I have had their Demi-Sec (see here). 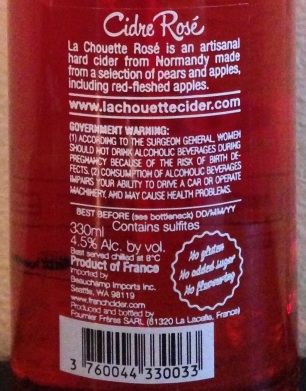 Availability:  In Washington, through Beauchamp Imports, plus online at their French Cider Inc. website.  In addition to La Chouette’s Rosé, they also offer their Demi-Sec.

Cider Description:  La Chouette Cidre Rosé is an all-natural craft cidre made from red-fleshed apples and pears – giving it a beautiful rose color and a bright, crisp demi-sec flavor. Thirst quenching and easy to drink, our 2018 prediction is that it will become one of your favorites.  No gluten, no added sugar and no added flavoring.

Cidery Description:  La Chouette—which means “the Owl” in French—refers to the surprising bond between this elusive night bird and French cidre. Traditionally, many farmers in the northwest of France made their own cidre with apples from their orchards. Often, the farmers made their cidre in barns, where the owls could be seen watching over the production from their perches under the roof. Thus La Chouette has always looked after French cider and continues to look over our cidre today.

My Opinion:  Awesome!  I really enjoyed everything about it – flavor, texture, complexity, and balance.  The flavor has a lot of the notes from the red-fleshed apples, plus pear.  You can tell that this is naturally (not force) carbonated, as it has such a fluffy texture, which helped make it seem lighter bodied than is typical for this level of sweetness.

Most Similar to:  nothing I’ve had, as this was like a combination of French poire (perry) and cider from red-fleshed apples

Closing Notes:  I found this far superior to most American commercial rosé selections.  It was more on par to ciders from red-fleshed apples (such as Alpenfire Glow and Snowdrift Red), although it had the added French and pear components.

Have you tried French cidre or rosé cider?  What did you think?