Review of Cider Riot Black Bloc series San Patricios Tequila Barrel Aged Irish Cider.  It is my first time trying this, but I have had their Never Give An Inch Oregon Blackberry, 1763, Champeg X-17, Burn Cider, and Everyday Semi-Dry. 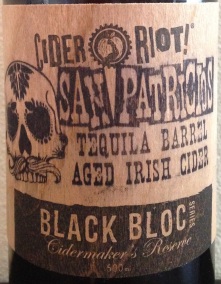 Availability:  Limited release of 100 cases, at least 1 year ago.  In general their ciders are sold in Oregon, Washington, and California in the U.S., British Columbia in Canada, plus Norway and Japan (see here).

Cider Description:  After 6 months in a fresh Mexican tequila barrel our Irish-Style cider is revved up and ready for action. Dedicated to those who fight for freedom and against injustice, this cider allies spicy, fresh tequila notes with stalwart French and American oak tannins from the barrel. Born a rebel, the San Patricios will die just the same. With less than 100 cases produced be sure to get yours before the battle is over.

I sent them an e-mail asking about apple varieties, and they said dessert (supermarket) apples, then fermented warm with Australian white wine yeast, with the tannins coming from the American and French oak mezcal tequila barrels.

Cidery Description:  Cider Riot! is dedicated to producing high quality ciders from Cascadian grown apples.  With tradition as our guide and our roots firmly planted in the rich soils of our bioregion, our urban cidery produces refreshing, flavorful ciders.

They have a “pub” in the Portland area.

My Opinion:  I was a bit ambivalent about this one.  I liked the flavor, and was very surprised to hear it was only dessert apples, as it was rich & tannic (plus darker in color).  However, I think it was a bit too dry for my personal liking, which also made the bitterness prevalent, plus the tequila flavor was very mild.  I think this would have been awesome if they went a bit sweeter and added some tequila and lime to up the flavor profile.

Closing Notes:  I think this is the richest / most tannic cider from only dessert apples that I’ve tried.  Its crazy that just the barrel aging did that.

Have you tried any tequila barrel aged cider?  What did you think?