Review of Tieton Bourbon Peach.  I tried this on draft 2 years ago (see here), and heard last year that it came out in bottles but never saw it.  Now that I found it this year, I wanted to do a full review.  I’ve also had their Cidermaker’s Reserve, Apricot, Smoked Pumpkin, Wind (Pommeau), Wild Washington, Cherry, Blossom Nectar, Sparkling Perry, Cranberry, Frost (ice cider), Spice Route, Russian Red, and Lavender Honey. 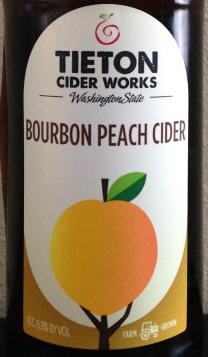 Cider Description:  Juice from hand-picked Washington State peaches is married with the richness of Kentucky bourbon barrels. This creates the perfect balance of sweet, ripe peaches and tartness of green apples. The charred oak of bourbon barrels gives this cider a deep vanilla and plum character. A touch of oak tannin finishes this cider off perfectly. Our love of what Northwest farmers have to offer has led us to create this “Limited Release” program. Featuring the bounty of our local agriculture, Tieton Cider Works’ Limited Releases will focus on some of the very best products the Northwest has to offer. Bourbon Peach is the perfect summertime libation with a refreshing blend of juicy peaches with and aged bourbon barrel flavors.

Cidery Description:  From branch to bottle, Tieton Cider Works controls every aspect of the growing and cidermaking process. Tieton Cider Works boasts the largest orchard of cider varieties in Washington state and the largest Perry pear orchard in the United States. We blend our gnarly, inedible cider fruit with our organically grown dessert fruit. We’ve been growing apples, apricots, cherries and pears on Harmony Orchards – our family farm – since the 1930’s and are thrilled to be involved in Re:interpreting the tradition of cider making.

Price:  $7.99
Where Bought:  a weird bottle shop / bar inside a mini mart in Lynnwood WA called Stogies N Hops (we won’t be going back as it stank horribly of cigarette/cigar smoke and had a weird vibe)
Where Drank:  home
How Found:  I first tried it on draft 2 years ago

My Opinion:  Awesome!  I love the flavor profile, and it has a nice complexity for being made from dessert apples.  This is exactly the type of cider that I go for when drinking non-cider-apple ciders – full flavored and semi-sweet to semi-dry.  If anything though I would have liked more bourbon.  I’m really glad they went a bit sweeter on this, as I think many barrel aged ciders often go too dry, which combined with the barrel & spirit influence can come across as harsh.

Most Similar to:  I’ve had a number of peach ciders, such as Black Fin Pacific Peach, Red Branch Peach, Schilling Road Trip (Peach Citra), Sancho Libre Peach Sangria, Fox Tail Fuzzy Haven, and Mission Trail Peach Coast (100% peach, so fruit wine not cider).  This reminds me most of the Schilling Road Trip, except it has bourbon instead of hops.  Most of the others were drier and more tart.

Closing Notes:  The price point on this is great too, for what you are getting (I checked Total Wine’s website and found out they just got it in stock, and sell it $1 cheaper, for $6.99).  I think this would do well in cans, but I think Tieton only does that for their ‘Rambling Route’ line (which I’m not a huge fan of, although its plenty drinkable).

Have you tried Tieton Bourbon Peach?  What did you think?