Epic!  This was my fifth year attending (see here for previous posts), but was the 10th annual Cider Summit in Seattle Washington.  It took place on Friday & Saturday September 6th & 7th.  This is post 1/2, covering the event.  Post 2/2 will have tasting notes on all the ciders I tried.

See my preview here.  I attended Friday afternoon, which is awesome as it isn’t too crowded yet, especially the VIP hour (2pm-3pm).  See here for the full event info and here for the full list of cideries (~54) and ciders (~150-200).  There were some substitutions and even 1 cidery no-show, but there were plenty of options, even for someone like me who had tried most of the lineup from most of the cideries.  There was even ice cider, Pommeau, Calvados and other spirits, and cider cocktails. 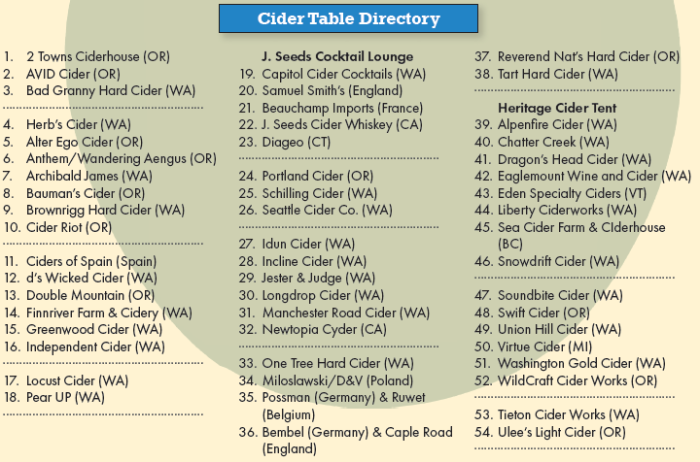 Although most ciders were from the PNW, there were a good number of national and international ones as well.  Also, the selections were primarily on the craft (vs. commercial) end.  Like last year, they had smaller pour sizes and more tickets for pours, so it was easier to try more selections.

Entry included a tasting glass, drink tickets, and wristband.  A cool feature of this event is that in addition to in & out privileges, one entry fee gets you in both days (and you can even skip the line on the second day), just keep your wristband on and bring your glass.  This year they were at a new venue, Lake Union Park outside of the MOHAI, instead of at South Lake Union Discovery Center across from Whole Foods.  It was still an outdoor event, and < 1 mile from the old site.  I liked this venue a bit better, as there seemed to be more space.  The only traffic jam area was around the heritage cider tent.

However, parking was a bit trickier.  Previously we’d always just park in the Whole Foods garage.  MOHAI has very little parking, and their main lot was marked permit only when we checked.  We ended up parking about a 5 minute walk away, at Chander’s Cove next to Daniels, where it was $20 for up to 10 hours, and a nice paved lot (vs. rocks); however, it was a pain to pay (needed to download an app and create an account).  The Amazon lots can be a great option if you are attending Friday night or anytime Saturday, but at 1:30pm on Friday we didn’t even try. 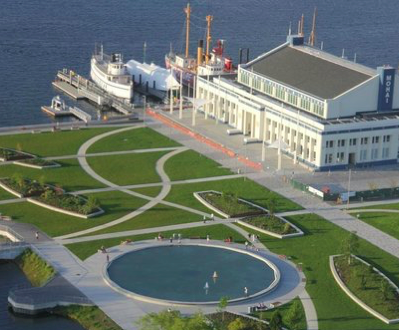 This event is very well organized, by far the best I have attended.  It is also very consistent year-to-year.  Everything from detailed pre-event information online (even a full cider list) to signage at the event to thinking of the little things like having rinse water available and a shaded seating area.  Its crazy to think about how much work goes into an event of this magnitude…renting a space, tables, canopies, and even fencing…finding volunteers, hiring staff for liquor enforcement and safety (at emergency exits), having extra ice and cider available, etc.

Another thing about this event that I really like is that the folks pouring the cider are associated with the cidery (cidery employees, sometimes even the cidermakers, or the distributor), so you can ask about the cidery and cider.  Plus, all the canned/bottled ciders are available in the shop (too bad there are so many great special releases they only had on draft).  The crowd was really varied, but had a lot of cider enthusiasts like myself.  There were also lots of vendors trying ciders, as it is common for a cidery to bring multiple people and swap out pouring.  A number of people brought their dogs too.

Besides the main attraction of cider booths, they had an event store (with can/bottles and t-shirts and such), a stage where they switched between interviews with some of the cidery reps and live music, food for sale (hot dogs, tamales, and pretzels – which were tasty but festival priced).  There were also cider related vendors (such as the Northwest Cider Association, CiderCraft & Sip Northwest magazines, and Press Then Press – a new online cider shop; see my reviews here) and some non-cider and non-food vendors.  The amenities were also above average for an outdoor event, with multiple food options for sale, concrete planter box edges to sit on, covered tables & chairs, clean port-a-potties with outdoor sinks, and free water (although this year it wasn’t cold like in years past…).

Friday is typically much less busy than Saturday, especially earlier in the afternoon and the VIP hour.  My game plan this year involved sleeping in, having a big lunch, getting to the event early to figure out parking, visiting all the cidery booths which are new to me during the VIP hour, taking a snack break, trying more ciders, then leaving and eating dinner with my husband.

I recommend good walking shoes, as you are on your feet for most of these types of events, and there are uneven dirt and patches of grass at outdoor sites like this.  Also, pants with pockets, to put your tasting tickets and cell phone and such in.  There are less grab & go food options within easy walking distance of this site, mostly sit down restaurants (like Daniel’s, whose bar we ate dinner at), but 3 food options on-site.  I bring my own snacks and water bottle though.

Other must-haves for me are a hat, sunblock, bug repellent, sunglasses, notebook & pencil, and a plastic baggie to put the tasting glasses in afterwards when they are sticky.  Its nice having a bag to put all that stuff in, as well as any free swag you want to collect.  ID is required to get in, and cash never hurts, although some places (like the Summit store) take cards.

A great way to get free admission is to volunteer; they had several shift options each day, and I heard that if you work closing on Saturday you may even get leftover bottled/ canned cider.  For the best ticket price, buy in advance, although there are taxes & fees for online sales.  Although VIP tickets are online sales only, if you want the best price on a regular ticket, you can go to Capitol Cider to avoid the fees.  The event didn’t sell out as far as I know, but the ticket price was higher at the door.  Designated driver tickets ($5) were only available at the door.

My 2nd Cider Summit Seattle 2019 post with tasting notes will be out soon!