Epic!  This was my third year attending (see here for previous posts), but was the eighth annual Cider Summit in Seattle Washington.  It took place on Friday & Saturday September 8th & 9th.  This is post 1/2, covering the event.  Post 2/2 will cover tasting notes on the dozens of ciders I tried [update – post 2/2 is now up – see here].

See my preview here.  We had some interesting weather for the weekend.  It was forecasted to be cool and cloudy with some showers, but it ended up being pretty hot when I was there on Friday.  See here for the full event info and here for the full list of cideries (~55) and ciders (~187).

There were some substitutions and a few less ciders than expected, plus this was a decrease in the number of cideries from the year before (although there were some new ones).  My favorite booths this year were for French cider (there were three booths pouring a total of six French ciders).  They were even pouring some meads (made from honey & water), non-apple fruit wines, apple whiskey, and cocktails in addition to ciders.  Although most ciders were from the PNW, there were a good number of national and international ones as well.  Also, the selections were primarily on the craft (vs. commercial) end.

There were 18 entries for the Fruit Cider Challenge.  I learned that the cideries were provided fruit puree from Oregon Fruit Products which they made cider with.  Votes were taken by text (1 per phone).

Entry included a tasting glass, tickets (8 for regular and 12 for VIP, each one good for a 4oz pour of most ciders), and wristband.  A cool feature of this event is that in addition to in & out privileges, one entry fee gets you in both days (and you can even skip the line on the second day).  This event is very well organized, by far the best I have gone to.  It is also very consistent year-to-year.

Everything from detailed pre-event information online (even a full cider list) to signage at the event to thinking of the little things like having rinse water available and standing tables in addition to seating.  It is crazy to think about how much work goes into an event of this magnitude…renting a space, tables, canopies, and even fencing…finding volunteers, hiring staff for liquor enforcement and safety (at emergency exits), having extra ice and cider available, etc.

Another thing about this event that I really like is that the folks pouring the cider are associated with the cidery (cidery employees, sometimes even the cidermakers, or the distributor), so you can ask about the cidery and cider.  The crowd was really varied, from cider enthusiasts like myself to people who just wanted to drink.  There were also lots of vendors trying ciders (as it was common for a cidery to bring 2-3 people and swap out).  A number of people brought their dogs.

Besides the main attraction of cider booths, they had an event store (with t-shirts and such), an audio booth where they did interviews with some of the cidery reps, food for sale from Whole Foods, Capitol Cider, & SUSU rolled ice cream, cider cocktails from Capitol Cider, samples of unfermented juice from Ryan’s, a dog lounge, info from the Northwest Cider Association, and lots of misc booths (the most interesting was Alaska Bug Bites, who drove 40 some hours one way to sell their dried fruit).  The amenities were also above average for an outdoor event, with multiple food options for sale, standing tables, tables & chairs (some covered), port-a-potties (and the main ones in the front actually had outdoor sinks), and cold filtered water (from Easy Tap).

Friday is typically much less busy than Saturday, especially earlier in the afternoon.  My game plan this year involved having a big lunch prior to the event and asking for smaller pours (often a booth would let you try a little bit of each cider they had for only 1 ticket), to maximize the number of ciders I could try.

I also always start with the new, expensive, and/or rare ciders, and visit the booths where I want to talk to the cidermakers first, before it gets too busy.  This year my backpack was full as I brought both rain and sun gear; I’m glad I brought the hat and sunblock though, as I ended up needing it, despite the cloudy forecast.

I also recommend good walking shoes, as you are on your feet for most of these types of events, and there was uneven grass at this site.  I also like bringing my own snacks, especially something starchy, like crackers.  Other must-haves for me are a notebook & pencil, and some baggies to put the tasting glasses in afterwards when they are sticky.  Its nice having a bag to put all that stuff in, as well as any free swag you want to collect (a couple booths were giving out good stuff like hats & t-shirts, but it was mostly the typical handouts, stickers, and coasters).  ID is required to get in, and cash never hurts, although some places take cards.

There are also a number of restaurants (and Whole Foods) within walking distance, so another food option is leaving, then coming back after a bit.  I have done that before, but this year we just powered through until dinnertime on Friday when we left.  Then my husband and I met up with a friend and did a bunch more walking, deciding where to have dinner, then waiting for a table (we went to Rocco’s pizza, which was amazing).

A great way to get free admission is to volunteer; they had several shift options each day, and I heard that if you work closing on Saturday you may even get leftover bottled cider.  For the best ticket price, buy them in advance, although there are taxes & fees for online sales.  Although VIP tickets are online sales only, if you want the best price on a regular ticket, they usually have at least one location to pick up tickets, which avoids the fees (this year the only place was Capitol Cider).  The event didn’t sell out as far as I know, but the ticket price was higher at the door.  Designated driver tickets ($5) were only available at the door. 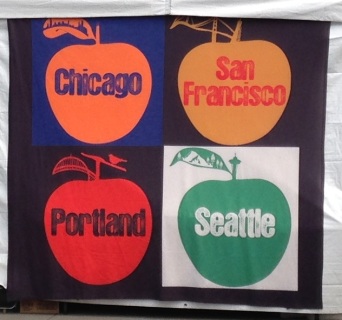 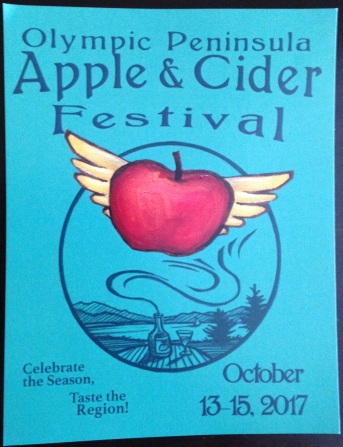 I’m looking forward to attending the Seattle International Beerfest at Seattle Center, July 10-12 2015.  Hubby and I are even planning to take the day off work so we can get there right when they open at noon on Friday, to hopefully beat the crowds and ensure we get to taste everything we want.  This unfortunately isn’t an event which has representatives from the breweries & cideries (beer & cider is served by volunteers), but it is still a great opportunity to drink some cider (and beer).

Entry gets you a wristband, tasting glass, and a specific number of tickets.  Advance sales are $25 (10 tickets) or $45 (40 tickets).  At the door it is $30 cash (10 tickets).  Additional tickets are sold for $1 each.  Beer & cider tastes (4oz) cost between 1 and 7 tickets each depending on their cost, where most are 1-3 tickets.  There are also a few selections to get a full pint for only $3, including Crispin Blackberry (I assume they mean Blackberry Pear).  Note that not all selections are on tap (some are bottles).  There will be music and food trucks.  This event is appealing as it appears more spread out than many, which often crowd folks into a small location.  If you are going, I’d recommend planning ahead what you want to taste; this helpful map even includes their locations and the number of tickets each will cost.

Ciders they plan to have:

Ace Pinapple (draft, 5% ABV, from CA, 1 ticket) – a very sweet but tasty pineapple cider; I like this one

Aspall Dry Cider (bottle, 6,8%, from England, 3 tickets) – dry English Draft style cider; I haven’t tried anything from them, so it’ll be on my list

Ace Blackjack 21 (bottle, 9%, from CA, 4 tickets) – a Chardonnay barrel cider which was a special release for their 21st birthday; this one was pretty good, but not worth the $15+ a bottle in my opinion

Crispin Blackberry (draft, 5%, from CA, only available as a pint for 3 tickets?) – I assume this is blackberry pear; I like this one – yummy and easy to drink, not too sweet

Crispin The Saint (bottle, 6.9%, from CA, 2 tickets) – part of their artisinal reserves, and has beer yeast & maple syrup; not a fan of this one as it tasted a bit like beer

Crispin Venus Reigns (bottle, 6.9%, from CA, 3 tickets) – wine barrel aged pear cider; I like this one, and surprisingly didn’t pick up much red wine taste, more berry/fruit – see my review

Samuel Smith’s Organic Cider (bottle, 5%, from England, 2 tickets) – apparently a plain cider which I haven’t gotten around to trying, so this will be on my list; my hubby likes their fruit ales

Wandering Angus Unspecified Variety (draft, TBD, from OR, TBD tickets) – no info given; a new release?; I’ll try it, although I haven’t liked two others from them (Wickson & Bloom, both too dry for my tastes, Wickson moreso)

Wyder’s Reposado Pear (draft, 6.9%, from VT, 1 ticket) – tequila barrel aged pear cider; I like this one – very smooth, and goes well with Mexican food, which can not often be said about cider!