Review of Woodchuck Sour Cherry.  This was a Cellar series release in Spring 2014.  They have since discontinued the Cellar series and now have the Out on a Limb series (six pack where the variety rotates every 45-60 days).  I was told that Sour Cherry is the same as Out on a Limb Cheeky Cherry, except 6.9% ABV instead of 5.5% ABV. 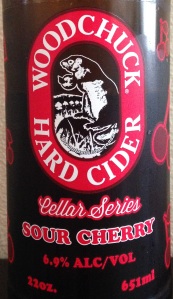 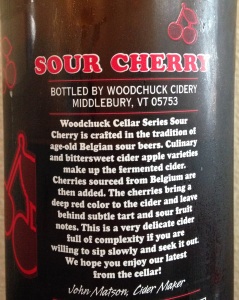 Cider Description:  Woodchuck Cellar Series Sour Cherry is crafted in the tradition of age-old Belgian sour beers.  Culinary and bittersweet cider apple varieties make up the fermented cider.  Cherries sourced from Belgium are then added.  The cherries bring a deep red color to the cider and leave behind subtle tat and sour fruit notes.  This is a very delicate cider full of complexity if you are willing to sip slowly and seek it out.  We hope you enjoy our latest from the cellar!  -John Matson, Cider Maker

First Impression:  Lovely cherry red hue.  Cherry scent.  This was lacking carbonation due to its age (the bottles I drank in Spring 2014 had moderate carbonation).

Opinion:  Semi-sweet to sweet.  Very fruit-forward.  It starts sweet then moves to a moderate tart (quick) finish.  This cider (like most fruity ciders in my opinion) is quite juice-like.  The alcohol is well hidden.  It isn’t complex (I don’t pick up any flavor notes besides cherry), but has a nice flavor.  I’ve never found a fruity cider which truly impressed me like other cider varieties, but this one is probably my favorite fruit-flavored cider along with Finnriver Lavender Black Currant (which does have more complexity).  Other favorite ciders of mine which have a lovely fruit-forward flavor but aren’t “flavored’ are Eaglemount Quince and Reverend Nat’s Revival.

Most Similar to:  Other sweet cherry ciders.  This Woodchuck variety has more cherry flavor than many other cherry ciders though (such as Elemental Cherry, Locust Sweet Dark Cherry, and Original Sin Cherry Tree).

Closing Notes:   What a tasty blast from the past!  Its probably good I finally decided to open this bottle, as it had lost some carbonation, and the flavor was probably next to go.  I think I mostly hung on to it as it was the last Cellar Series release.  I was initially quite disappointed when Woodchuck dropped their Cellar Series and moved to Out on a Limb.  However, it has turned out quite well as it is even less of a commitment; I can get a single 12 oz bottle from the six pack (many stores split them up) instead of a 22 oz bottle.  This was my favorite Cellar Series of Sour Cherry, Mint, and Chocolate (I never tried Smoked Apple, Dry Hop, or Ginger).  They definitely came out with some weird ones!

Have you tried Woodchuck Sour Cherry or Cheeky Cherry?  What did you think?