Review of the Pear variety from Original Sin.  Note that this is pear cider (apple cider with pear juice added), not perry (made from 100% pear juice). 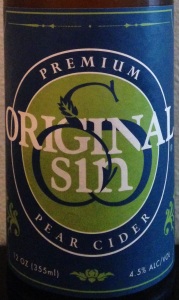 Availability:  year round, in over 30 U.S. states, the UK, and Japan

Cidery Description:  20th-century American ciders were sweet, syrupy – a far cry from the dry, crisp, revolution-inciting ciders of our country’s past.  Gidon Coll wanted to reconnect America to its roots by creating a traditional cider with the complexity to satisfy today’s discriminating palates.  But where to begin?  Coll immersed himself in the history and the craft of cider. He experimented. He brewed batch after batch in a small upstate New York winery. He sought counsel from a local wine expert and from the owners, bartenders and patrons of bars he frequented in New York City’s Lower East Side and East Village. He collected feedback from everyone he knew, adjusting and tinkering with his cider’s flavor until it was clean, crisp, and practically perfect.  Then he enlisted friends to painstakingly hand-label bottle after bottle. He lugged cases and cases in and out of NYC’s subways, delivering bottles to establishments of Manhattan and Brooklyn.  And it wasn’t long before Original Sin began receiving wide acclaim from sources as diverse as The New York Times, New York Post, Paper Magazine and Market Watch.  Today, you can find  Original Sin’s unique, award-winning ciders in over 30 states, as well as overseas in the U.K. and Japan. But it all started here in the U.S. — inspired by our country’s past: a clean, crisp, DEVILISHLY DELICIOUS cider for our future.  [founded in 1997]

Price:  ~$2 for a single bottle (runs $10 for a six pack)
Where Bought:  Total Wine
Where Drank:  home
How Found:  Browsing.  I’d been wanting to review an Original Sin cider, and hadn’t tried this one. 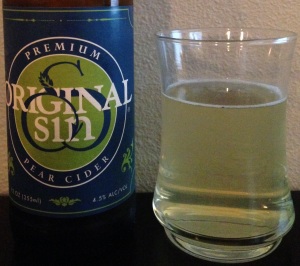 Opinion:  Semi-dry.  Very fizzy and champagne-like.  However, the flavor is much more tart & tangy green apple with citrus than pear.  No bitterness.  Moderate acidity.  Light bodied.  No funk.  Some yeasty flavor.  I agree it is “light and refreshing with a clean, dry finish”, but I prefer a more boldly flavored cider.  I liked the carbonation level and the dryness though.

Most Similar to:  Portland Cider Pearfect Perry, which I tried on tap at the Schilling Cider House.  It was also rather mild with almost no pear flavor, but fizzy and refreshing.  That one however was a true perry (100% pear juice, Bartlett and D’Anjou), unlike Original Sin Pear.

Closing Notes:   Refreshing, but on the bland side and unimpressive.  Original Sin currently offers Apple, Apricot, Pear, Elderberry, Cherry Tree, Northern Spy, and Newtown Pippin varieties.  I’ve also tried the Elderberry and Cherry Tree, and would say they were also pretty average.  Original Sin’s ciders tend to be on the drier side of the 6 pack cider offerings.  They are an affordable and widely available craft cider option however, which is something to be commended.

Have you tried Original Sin Pear?  What did you think?