Review of The Bad Apple from 2 Towns.  I’ve had this cider before, and many other 2 Towns varieties.  Isn’t their bottle styling awesome?  Really eye-catching. 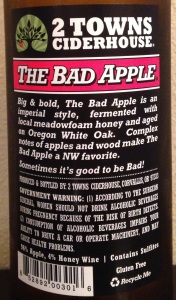 Cidery Description:  2 Towns was founded in 2010 by partners Lee Larsen and Aaron Sarnoff. Dave Takush joined us shortly thereafter. All three of us grew up together in the Corvallis, OR area. We’ve had explosive growth since our inception at which point we had intended to produce and distribute cider to the Corvallis, OR and Eugene, OR areas only (incidentally, the 2 Towns of our namesake). It became readily apparent that our initial vision needed to grow as we hit our maximum capacity in our first production space (a converted 1,000 sq ft garage) in roughly 2 months. We’ve since built 2 new production facilities with a total of 25,000 sq ft of production space and our team has grown to over 30 people to help us to distribute to 9 states and counting.

Over this time, we’ve kept to our original goal of bringing craft hard cider back to the people. We feel that a craft cider is made with fresh-pressed fruit and contain no artificial flavorings. Our fruit is all sourced in Oregon & Washington and all of our ciders are also free from added sugars other than those present in the juice and in some cases local honey. We feel that cider doesn’t need to be sweet to express the natural flavors of the fruits we ferment.

2 Towns Ciderhouse planted an orchard in 2011 with all traditional cider apple varieties such as Kingston Black, Dabinett, Jersey Brown Snout, and many others. 2 Towns has also contracted with several growers in the Willamette Valley and beyond to grow additional traditional cider fruit.

Price:  $7.50
Where Bought:  Special Brews in Lynnwood WA
Where Drank:  home
How Found:  Initially, browsing.  I’ve had this cider at least once before and was in the mood to have another bottle. 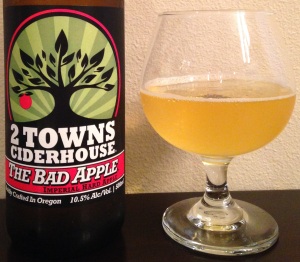 Opinion:  Semi-dry.  Quite apple-forward, with rich apple, honey, vanilla, and oak notes.  The perceived barrel influence remains mild.  Moderate acidity and tartness.  I almost pick up some citrus with the tartness.  Mild bitterness and astringency.  No sourness or funk.  Medium bodied.  Low to moderate carbonation.  Longer finish with lingering tartness and acidity.  Well-hidden ABV, which mostly presents as warmth.  Complex but simple at the same time.  I enjoyed this fridge cold, which surprised me as usually with this style of cider I like it closer to room temperature than fridge temperature…when it warmed up the tartness seemed more present.

Most Similar to:  This kinda reminds me of Moonlight Meadery ‘How Do You Like Them Little Apples’ cider for some reason…probably as that one tasted like it was higher ABV (but wasn’t), and had honey and oak notes (but it was sweeter and more full bodied).  By the way, I find this cider very different from the other 2 Towns Imperial-Style cider I’ve tried, Serious Scrump, which is an 11% ABV English-Style cider available seasonally, which I found to be quite dry and bitter and not to my liking.

Closing Notes:   Awesome!  This is actually my favorite cider from their regular line so far (and I’ve tried at least 10 ciders from 2 Towns).  I think its a great value.  I also think 2 Towns is a really cool cidery in general…really down to earth and fun-loving.  Their tag line is “Damn Fine Cider” lol.  I hope to visit them someday in Corvallis OR.  I’ve actually met co-founder Aaron Sarnroff-Wood (at Cider Summit Seattle 2015 and a Schilling Cider House 2 Towns tasting event) and communicated with him by e-mail about their Cider Master Reserve Batch No 01, and he is super helpful.  I highly recommend this cider if you enjoy higher-ABV ciders and want something unique.

Have you tried any ciders from 2 Towns?  What did you think?