Review of Alpenfire Cider’s Smoke Barrel Aged Cider.  See my past reviews of their ciders here.  I tried this cider before and loved it, but hadn’t been able to find it for awhile (it hasn’t been released for awhile and the next batch is still barrel aging…see my post here), so I was excited to stumble across some again. 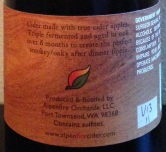 Availability:  Limited (and hasn’t been released in awhile), and only in Western Washington

Cider Description:  Smoke, our smoky-oaky after dinner tipple style cider has been triple fermented in whiskey and mead barrels.  It starts with Kingston Black, Dabinett and Vilberie apples for a very tannic base.  Aging in charred oak concentrates all the best features of each apple variety.

Cidery Description:  Alpenfire Organic Cider is made from our estate and locally grown organic apples. We planted our WSDA certified organic orchard in 2004 with over 800 trees and 10 varieties of English, French & Early American cider specific apples. These apples have been used for hundreds of years for the unique qualities they bring to cider production. Namely the tannins and bitters not found in dessert style apples. While the juice, much less the fruit, of many of these apples would be hard to enjoy by the glass they become amazing with a little fermentation. One of our favorites, the “Muscadet de Dieppe”, has a viscous, winey, yes, even musky juice. It takes months of slow, cool fermentation for that to develop the subtle aroma and flavor you will find in our bone-dry cider. We augment our juice and mellow the flavors with organic apples from other local orchards.

Price:  $17
Where Bought:  Special Brews
Where Drank:  home
How Found:  Browsing, although I’ve tried it before.  I was surprised to see they had a couple cases of this on the shelf, consider how long its been since its release, and that no other shops have any left (including at the Alpenfire Cidery). 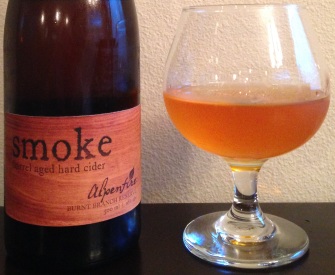 My Opinion:  Amazing!  This one is definitely one of my all time favorite ciders, and my favorite Alpenfire cider.  Its a great after dinner sipping cider, and one bottle lasted me awhile as a few ounces is plenty (and it keeps rather well as it isn’t carbonated).  This cider is highly complex, rich, very smooth, and tastes a lower ABV than it is.  I enjoyed this at a range of temperatures, from just out of the fridge to room temperature, although I think I tended towards colder.  I saw another post that ice could be used, and I think for a higher ABV flavorful beverage that isn’t out of the question (I’ve done so for Pommeau).

Most Similar to:   Not much else.  Maybe Sea Cider Prohibition / Rumrunner?  That is another high ABV complex (rum) barrel aged sipping cider, but even though its higher ABV, I’d say the flavor is a bit more harsh and in your face (its also drier though).  Another is Liberty Ciderworks Manchurian Crabapple.  It wasn’t barrel aged, but is a high ABV port-style single varietal with a lot of complexity.  This is also kinda similar to Pommeau with its complexity and high ABV.

Closing Notes:   I’m glad I bought two bottles of this one, as I still have another to tide me over until its next release.  This is definitely my kind of cider, having all the aspects I enjoy most–local, craft, higher ABV, sweeter, complex, flavorful, rich, made from bittersweet cider apples, and barrel aged.

Have you tried Alpenfire Smoke?  What did you think?