Bushwhacker Cider was the last stop of the weekend, on Sunday, on our way out of town.  We arrived when they opened just after noon.  It was quiet as expected due to the time of day, with only a couple people stopping in to buy some bottles while we were there.  The atmosphere is very casual, with some bar seating, and high top & regular tables, as well as arcade games.  The bartender was very friendly and helpful.

They offer up to 8 ciders on tap (mostly their own) plus 6 bottle pours, and some snacks.  There are small and large pour size options too.  I think the bottle pours are especially awesome as you don’t see that much; they focused on ciders which keep well (like the awesome Etienne Dupont Pommeau which I’ve tried previously; see here).  I also really liked that they had detailed descriptions of the ciders they were pouring.

I started off by browsing their bottle selection, which was awesome by the way, on par with the Schilling Cider House, with hundreds of options.  Everything was organized by region (and even subregion – their French ciders were labeled Normandy vs. Brittany), and refrigerated.  There was a focus on Northwest ciders of course, but also selections from across the U.S., England, France, Spain, and more.

My husband sampled Bushwhacker’s flagship Forgotten Trail cider on tap, made from Oregon apples.  After I finished picking out bottles, I sampled a bag in box pour of Hogan’s Picker’s Passion, an English cider (they also sell at least one Hogan’s variety packaged this way with 3 liters of cider, which would be a fun option for a party and apparently keeps very well long term too). 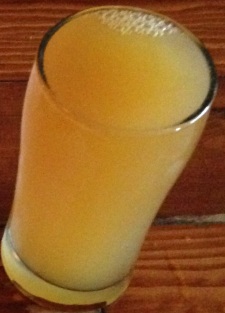 Bushwhacker Forgotten Trail (5.7% ABV):  Nearly clear hue (the bar’s “house water” lol).  Low carbonation.  Dry.  Moderate tartness and acidity.  No bitterness, tannins, sourness, or funk.  Notes of citrus and granny smith apples.  Low apple flavor, flavor intensity, and complexity.  High sessionability.  This reminds me of champagne except with lower carbonation.  My husband really enjoyed it and bought a few single bottles.  I thought it was average.  Easy to drink and refreshing, but not remarkable.

Update – Based on my review of a bottled version of Forgotten Trail (see here), this may have been their “Alice” variety.

Hogan’s Picker’s Passion (5.3% ABV):  Hazy unfiltered apple juice type hue.  Still (no carbonation).  Very thin bodied.  Semi-dry.  Low tartness, acidity, tannins, and bitterness.  Hints of funk and sourness.  Notes of apple pomace and bittersweet apple juice, but overall the flavor is simple and mild.  Low flavor intensity and complexity.  Moderate apple flavor and sessionability.  Warming moderate to long finish.  I thought it was average (I would have preferred more body and flavor).  English cider is one of my favorite categories.  So far I prefer English ciders from cideries such as Sheppy’s, Dunkertons, Worley’s, and Aspall over Hogan’s, Pilton, Burrow Hill, Thatchers, Sandford Orchards, and Ross on Wye, as I enjoy a flavorful cider without significant bitterness, sourness, or funk.

I thought this was a good post to summarize what bottles we purchased over the weekend, especially as the majority were from Bushwhacker’s. 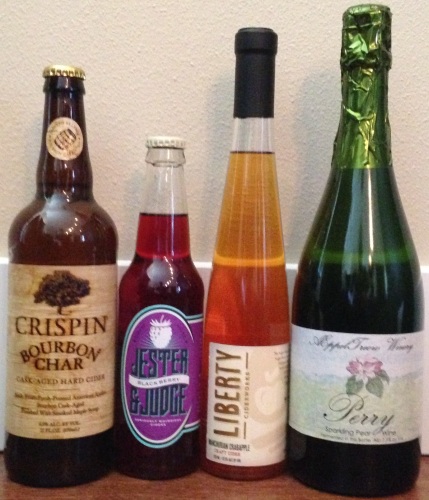 We had a great cider weekend in Portland and look forward to another (hopefully longer) trip sometime soon!