Review of Aval Cidre Artisinal, from France.  I’ve tried this twice before; the first was a sample pour from a friend’s bottle (see here), and the second was a bottle I bought (see here).  However, the co-founder of Aval replied to my review (which stated that it tasted flat) stating it was supposed to be carbonated, and was kind enough to send a replacement (actually three, smaller bottles, instead of the larger one I had originally).  I’ve also sampled a number of other French ciders (like these). 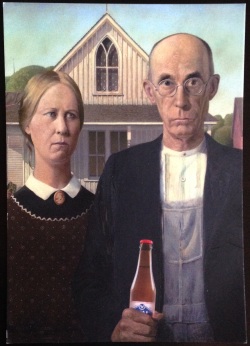 <they also sent some swag Postcards; this one is just funny, although a couple were a bit racy, of famous paintings with Aval added>

>>This is a review of a sample bottle provided to Cider Says by Aval.  Although I will take care to treat it the same as any other review, there is always the potential for bias as I received it for free.  The only consideration I knowingly made was pushing this up in my cider review cue.  I love free stuff, especially cider!  Want your cider or cider-related product reviewed here?  Contact me.<< 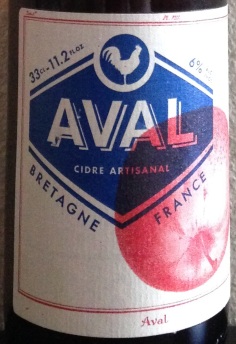 Availability:  At least in IL, LA, MA, MO, NY, OR, and TX (per this list).  Plus I expect it in WA soon (as my friend who manages the Schilling Cider House got a sample, although I haven’t seen it carried in any store yet), and I read it is in VT.

Description:  Made in Bretagne, France.  From 100% pure apple juice (Not from concentrate).  Naturally Gluten Free.  All-natural.  No added sugar.  6% abv.

AVAL means Apple in Breton, the traditional language in Bretagne, the region where it comes from, that’s had more than 1000 years experience in making cider and is touted by insiders as the best cider region in the world.

AVAL cider combines five types of apples exclusively from the region, giving the drink a crisp and citrusy taste. It’s the perfect balance between subtle sweetness and refreshing bitterness.

Here is the press release from their U.S. launch in fall 2016. 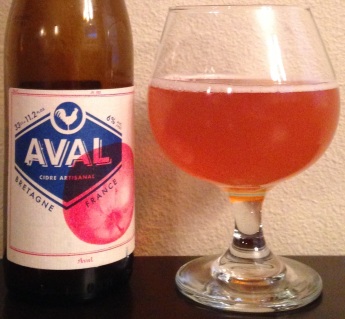 My Opinion:  I liked it.  This was definitely different than the other batch…way more carbonated, but also more yeasty and bitter, especially on the finish.  Not better or worse, but different.  More beer-like.

Closing Notes:  Some of my favorite French cidres remain Celt, Dan Armor, and Le Brun.  However, I definitely wouldn’t hesitate to drink this one, especially if I found it in a convenient four pack of 11.2oz single bottles and couldn’t get Celt (which I usually stock on the house).  I’d say Celt is more likely to be a crowd-pleaser and/or good for folks new to cider, but Aval is more likely to please a beer-drinker and/or someone who usually tends towards Normandy instead of Brittany French ciders.