Review of Wrangletown Cider Company’s “Original” cider.  This is my first time trying their cider, and the first of four reviews of their cider lineup. 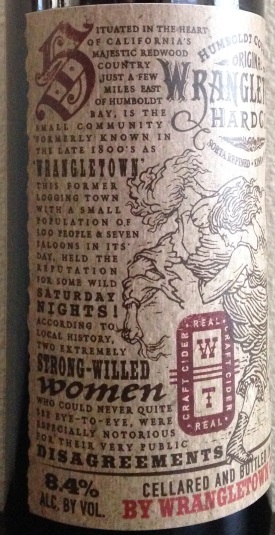 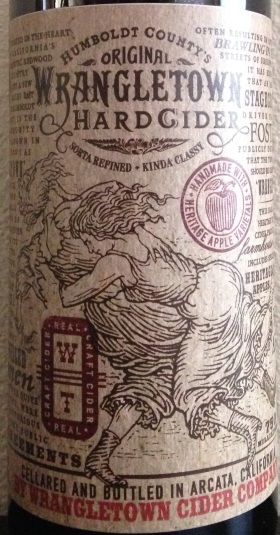 Cider Description:  Wrangletown’s “Original” Dry Farmhouse style cider is a combination of several Northern California Orchards.  It is a dry cider, lightly carbonated with fruit forward aroma and bright acidity.  Made from Heirloom and Culinary apples.  This cider was fermented in 74% Stainless steel and 23% used French Oak barrels.

Price:  n/a (retails for $16)
Where Bought:  n/a
Where Drank:  home
How Found:  The owner/cidermaker contacted me.

My Opinion:  This isn’t my favorite style of cider; I usually go for a more intensely flavored cider, and I found this a bit nuanced.  However, I certainly couldn’t find any faults, and didn’t dislike it.  This is a more introductory farmhouse-style cider, with only hints of sourness & funk.  This will likely appeal to folks who enjoy wine and milder food-friendly ciders.  I always think of my personal opinion as more of an afterthought to my reviews (which is why I don’t rate ciders here).  Everyone has a different taste in ciders, and every cider won’t appeal to every person.

Closing Notes:  (1) I look forward to trying the other three ciders that Wrangletown sent.  (2) One thing I’m a big fan of so far is that they clearly describe their cider as dry and farmhouse-style on the label.  I’ve had a number of ciders that were on the extreme end of the farmhouse-style & sour spectrum, and even they weren’t labeled as such (and sometimes I couldn’t find info online saying that either).  It is much appreciated as I enjoy being an informed consumer. (3) Cideries which focus on rustic farmhouse-style ciders seem to be on the rise (I’ve seen it first hand in Portland at Cider Rite of Spring), so there must be a demand.