Review of Wrangletown Cider Company’s Oak Barrel Aged Cider.  This is my first time trying this cider, but I previously tried their “Original“. 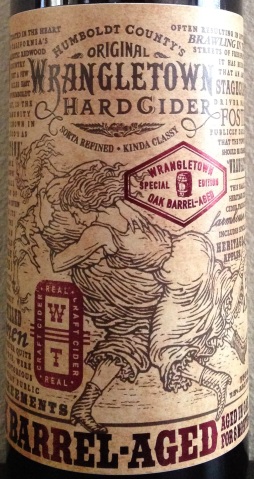 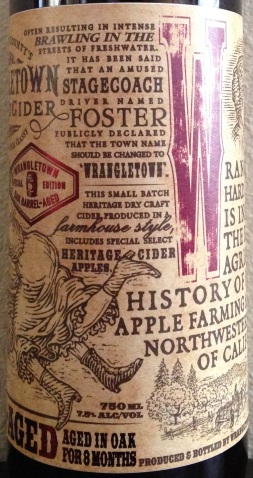 Cider Description:  Wrangletown’s “Oak Barrel-Aged” Dry Farmhouse style cider is a combination of several Northern California Orchards.  It is a dry cider,  aged for 8 months in lightly used French Oak that formerly held Russian River Chardonnay.   The palate is rich with fine tannins and  a  round wine-like mouthfeel.  This cider would appeal to both oak barrel-aged beer fans as well as wine drinkers.  It pairs wonderfully lively flavored foods.  Wrangletown’s Oak Barrel-Aged Cider is made from Heirloom and Culinary apples.

Price:  n/a (retails for $18)
Where Bought:  n/a
Where Drank:  home
How Found:  The owner/cidermaker contacted me. 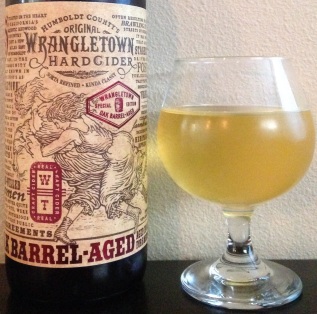 My Opinion:  This was a bit smoother than the “Original”, with a hint of oak and a bit more earthiness.  I liked this a bit more than “Original”.  However, this isn’t my favorite style of cider; I usually go for a more intensely flavored cider, and I found this a bit nuanced.  However, I certainly couldn’t find any faults, and didn’t dislike it.  This is a more introductory farmhouse-style cider, with only hints of sourness & funk.  This will likely appeal to folks who enjoy wine and milder food-friendly ciders.  I always think of my personal opinion as more of an afterthought to my reviews (which is why I don’t rate ciders here).  Everyone has a different taste in ciders, and every cider won’t appeal to every person.