Review of Domaine de la Minotiere’s Cidre Fermier Bio Doux.  It is my first time trying this, but I have had many French ciders, such as these.

>>This is a review of a sample bottle provided to Cider Says by Winesellers, Ltd.  Although I will take care to treat it the same as any other review, there is always the potential for bias as I received it for free.  The only consideration I knowingly made was pushing this up in my cider review cue.  I love free stuff, especially cider!  Want your cider or cider-related product reviewed here?  Contact me.<< 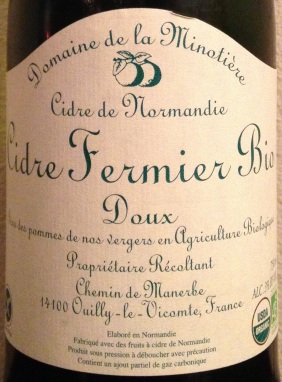 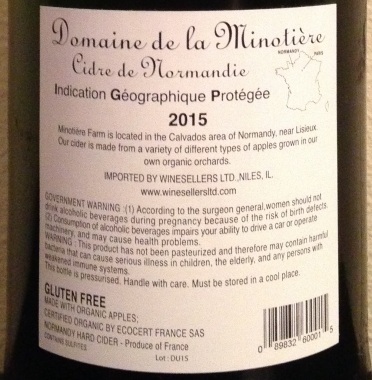 Cider Description:  This cider is full-bodied and slightly sweet, with subtle apple character and a beautiful balance of acid, tannin, and sugar. It has a mix of citrus peel, fruity aromas of apricot and citrus fruit, and musty floral notes.

Cidery Description:  Domaine de la Minotiere is a small 15-hectare single domaine of cidre orchards cultivated under 100% organic certification. The specialty is traditional farmhouse cidre produced both in a dry (Brut) and sweet (Doux) style. The Domaine de la Minotiere owns a long tradition and elaboration of farmhouse cider coming from the fruit of its orchards, in a place called the “Golden Triangle” – known to be the best area to produce cider.

My Opinion:  Awesome!  I was expecting this to be very sweet, but was pleasantly surprised.  I loved the flavor profile.  Similar to Manoir de Grandouet Cidre Fermier Brut, the funk/barnyard scent was quite strong, but didn’t transfer much to the flavor, and dissipated over time.  It was also similar to the Grandouet in how the ripe apple yeasty funky characteristics of the Norman cider were expressed without any perceived sourness (yay!), and that it was more rich than fruity.  This cider is also an excellent value for being imported and Organic.

Most Similar to:  Manoir de Grandouet Cidre Fermier Brut and L’Hermitiére Cidre Brut (very much so, although this is sweeter than both of those), Manoir De Montreuil Cambremer, and Christian Drouin Pays d’Auge

Closing Notes:  It seems odd to have a cider with only 3% ABV, but that is fairly common in France (some are even lower!).  I found a post online of someone recommending this as a brunch cider, and I totally agree.  They also have a drier (Brut) version of this cider that is 5% ABV, which I also plan to try.