Review of Cidrerie Daufresne’s Poire, a French perry.  It is my first time trying this, but I have had several other poires.

>>This is a review of a sample bottle provided to Cider Says by Winesellers, Ltd.  Although I will take care to treat it the same as any other review, there is always the potential for bias as I received it for free.  The only consideration I knowingly made was pushing this up in my cider review cue.  I love free stuff, especially cider!  Want your cider or cider-related product reviewed here?  Contact me.<< 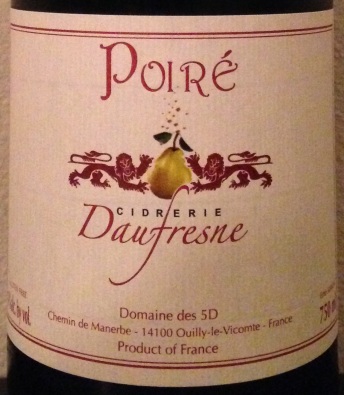 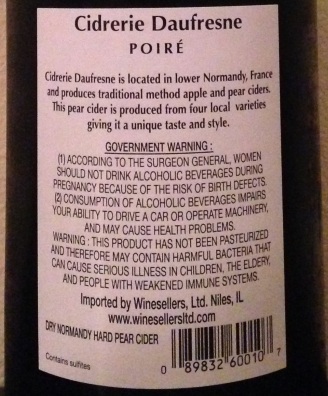 Cider Description:  A perry pear is gritty, tannic and acidic, which makes it somewhat similar to acider apple. But that is where the similarities end. Perry pear tannins tend to be rounder than those found in cider apples, and the pears used for perry have less malic acid than cider apples, resulting in a beverage that is less tart and more delicate. The Daufresne Poiré offers clear, sparkling and persistent effervescence and aromas. Tastes of fresh pear fruit, hints of melon and citrus, natural sediments in glass, rustic with a clean pure sweetness, balanced by refreshing acidity.

Cidery Description:  Located in the heart of the Pays d’Auge, at the gates of Lisieux, we can discover the area of ​​5 D, with its cider house at the foot of the orchards hills, formerly called the Pré des Vignes, in reference to the vines formerly exploited on this parcel.  It is this beautiful south-facing exhibition that prompted Philippe Daufresne to plant his orchard in the 60s, instead of the old vines, for the production of his cider and calvados.  For 4 years, retirement requires, the domain was taken over by Ghislaine Davy, who is resolutely committed to a quality and elegance approach.  To develop the different cider products, 150 tons of apples are brewed each year on the estate.

The apples come from the orchards of the cider house but also from the different orchards around, which multiplies all the varieties used: Germaine, Blangy cemetery, red binet, bisquet, St Martin, Christmas fields, President descourt, windmill, mettais, rambault, and many others…  In order to give each product a balanced aromatic bouquet, the varieties are carefully selected to find the right balance between the freshness of tart apples, the delicacy of sweet apples, and the corpus of bitter apples.  The Daufrresne cider is a must at the tables of the Côte Fleurie. Well known to the Parisian resort clientele, he is regularly awarded at the Paris General Competition, with this latest gold medal at the Paris 2017 general competition.

Price:  n/a (retails for $12)
Where Bought:  n/a
Where Drank:  home
How Found:  the importer contacted me

My Opinion:  I liked it.  Very juicy and fizzy.  The scent was off-putting at first, but it dissipated, and didn’t transfer to the flavor.

Most Similar to:  Christian Drouin Poire, as it is of similar sweetness and flavor notes (although it is cleaner than Cidrerie Daufresne’s Poire, which has some funk).

Closing Notes:  I also have a cider from Cidrerie Daufresne to try.

Have you tried French poire?  What did you think?