Review of Le Brun’s Brut.  This is my first time trying this Brittany French cidre, although I have had their Organic Cidre and Poire (perry).  These three varieties are the only ones offered in the U.S., although in France (and Europe probably) there are probably more. 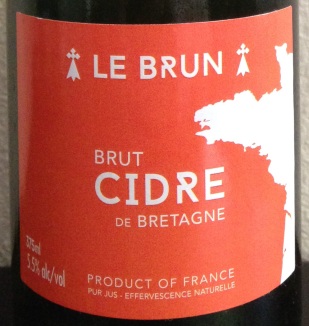 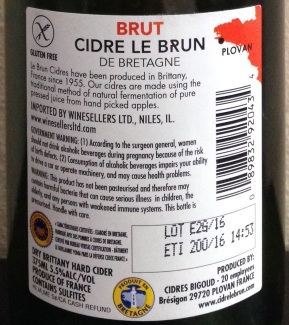 Cider Description:  Aromas of sweet, ripe apples dominate the nose.  The sweetness is nicely balanced by moderate acidity and light tannins drying it out on the finish with a beautiful woody note. A crisp, well balanced and an interesting cider. A cider with real depth and character.

Cidery Description:  Le Brun Cidres have been produced in Brittany, France since 1955. Cidres are made using the traditional method of natural fermentation of pure pressed juices from handpicked apples.

Price:  $5
Where Bought:  Schilling Cider House
Where Drank:  home
How Found:  Browsing.  It was the first time I had seen these half bottles, which at 1/2 the price are a great deal.

<the bottle foamed over after opening, even after letting it sit a few minutes after I took it out of the fridge and photographed the labels>

My Opinion:  I didn’t personally like this at all due to the sourness, which is my number one disliked quality in a cider (for some reason it just hits my taste buds all wrong and that is all I can taste).  I was surprised by the sourness and funk, as although this is noted as being wild fermented, Brittany cidres usually remain clean (unlike most Normandy cidres), and the other two selections I’ve tried from the cidery were clean.

Closing Notes:  I much prefer their Organic Cidre, which is sweeter and fairly clean (only a bit of funk, which I actually like).