Review of a Strongbow variety pack with four of each of Original Dry, Rosé Apple, and Pear Secco, in 8.5 oz cans.  I’ve previously tried the Original Dry, but not since it was re-released in the U.S., and I’ve not tried the other two.

Cidery Description:  Strongbow is the #1 import cider in the US.  With 50% conversion to usage, shoppers who buy once, buy again.  Exclusively available in this 100 Cal variety pack, we think Dry Pear is a great addition to the award-winning line up of flavors in the 100 Cal Slim Cans.  It’s a one-two punch; a popular, refreshing new flavor in a package that’s on-trend.  To find all Strongbow flavors near you, please visit our product locator at http://www.Strongbow.com. Strongbow recommends enjoying its hard ciders served over ice, for a crisp, refreshing taste.

Price:  $11.99 / 12 pack of 8.5oz cans
Where Bought:  Target
Where Drank:  home
How Found:  browsing; it was my first time spotting the re-released Original Dry in the U.S., so I was going to get a 4 pack of that, but then I saw the variety pack which also included 2 others which I haven’t tried 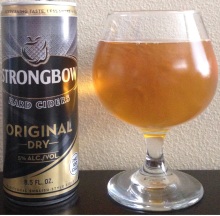 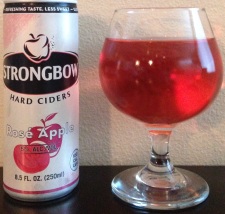 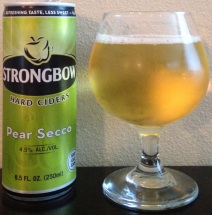 My Opinion:  I liked all of these.  Definitely commercial tasting (ie. slightly less natural tasting, likely due to the processes used, such as adding sugar instead of back sweetening with juice), but plenty drinkable, with some flavor and not too much sweetness, and far from the worst I’ve had.  I also liked getting a smaller variety pack (as its 8.5oz not 12oz cans), although ideally it would have only been 2 instead of 4 of each.

Closing Notes:  Although I typically prefer craft cider, I think commercial ciders are underappreciated.  It seems that most people (including myself) started their cider journey with an easily available sweeter commercial cider, and over time their tastes evolved towards drier local craft selections.  However, there are still parts of the U.S. where craft cider is difficult to find.  Thankfully the offerings from commercial cideries (such as Angry Orchard and Woodchuck) have improved in recent years, tending towards more complex, drier, and/or more innovative offerings, as they struggle to compete with growing regional craft cideries.

Have you tried Strongbow?  What did you think?