I was recently invited to a preview of Washington Cider Week for media and industry folks.  The 9th annual Washington Cider Week is September 5th-15th 2019, and will include numerous cider events, with Cider Summit Seattle being a highlight (see my posts here).  The preview event was hosted by the NW Cider Association, and held in the orchard at Dragon’s Head Cider on Vashon Island in WA.

It was a sweet invite-only event, and I enjoyed the excuse to take a half day off work and taste cider with my husband from about a dozen cideries, and chat with cidery reps.  New for this year they had a panel discussion, hosted by Erin James (of CiderCraft and Sip NW magazines), featuring Emily Ritchie (the Director of NW Cider) and folks from PCC, Zeek’s pizza, and Teku Tavern, who shared about the role of cider in their businesses. 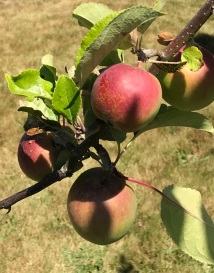 Erin James shared some interesting facts, like that cider grew 10 fold in 10 years (faster than craft beer did), 6-8% of beer sales in WA are cider (vs. 1-3% in most other states), and 1/3 of NW cideries are orchard-based (like Dragon’s Head). 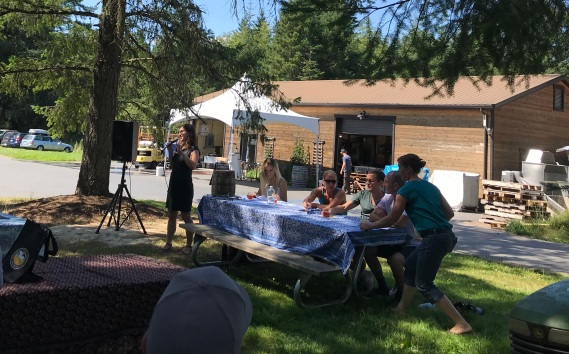 They had some nice swag too – a bottle tote bag, brochures, keychain bottle opener, and a bottle stopper (as the NW Cider association is pushing the idea of bars & restaurants offering cider from bottle pours, not just kegs, especially as many of the smaller heritage cideries don’t keg their ciders).

Now, on to the cider! 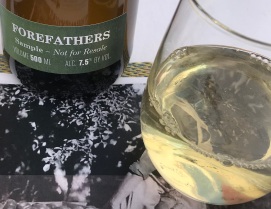 2 Towns (Corvallis OR) Suns Out Saison (5.6%):  Their 2nd fruit seasonal release of the year, from dessert apples and peaches, fermented with Saison beer yeast, a re-release of the 2016 version (see my review here).  Semi-dry with notes of peach, citrus, yeast, and earth.  I learned their 3rd fruit seasonal will be Cosmic Currant, made with black currant and cranberry.  I was also told to be on the lookout for Marissimo later this year, a limited release marionberry barrel aged Pommeau.  A tasty summery cider with flavor but not to much sweetness.

Snowdrift (Wenatchee WA) Forefathers (7.5%):  A new draft-only release, from a combination of apples including both cider and dessert apple varieties.  On the sweeter side of semi-dry, with notes of citrus, floral, and honey, and a hint of tannins.  Approachable. 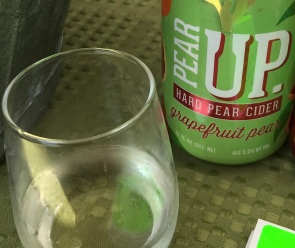 Pear UP (Wenatchee WA) Grapefruit:  A new canned release, a grapefruit perry (from 100% pears, no apples).  The grapefruit was stronger on the nose than the flavor.  Very refreshing, almost like a grapefruit soda, but only mid-level sweetness, and nearly still.  I wouldn’t have guessed it was perry.

Tieton (Yakima WA) Single Varietal Harrison:  A new release, bottled & kegged, a single varietal from Harrison bittersharp cider apples.  On the sweeter side of semi-dry, with notes of citrus & honey.  I really enjoyed it, as its more approachable than a lot of other heritage ciders, being sweeter.  I was surprised with the lack of sharpness and/or bitterness.  Awesome.

Finnriver (Port Townsend WA) Fire Barrel:  A whiskey barrel aged cider from cider apples.  I’ve tried this before (see here), but I think this is a newer vintage.  Semi-dry to semi-sweet.  Super rich, with notes of smoke, oak, and orange.  I really enjoyed it, but prefer the original vintages (see here).

Finnriver (Port Townsend WA) Golden Russet:  Made from ‘russeted’ cider apples, primarily Golden Russet.  Dry to semi-dry, acidic, with notes of citrus and earth.  A bit nuanced for my tastes.

Bad Granny (Wenatchee WA) Reserve:  A new release using cider apples, and for the first time for them, methode champenoise, a traditional labor intensive method to make a naturally sparkling cider.  Dry to semi-dry.  Light fluffy texture with lots of bubbles.  Notes of sharp apple and citrus with hints of bitterness and tannins.  Also a bit nuanced for my tastes.

Bad Granny (Wenatchee WA) Honey Crisp:  A flagship offering, but per my notes I actually haven’t tried it.  On the sweeter side of semi-dry, apple-forward, with a bit of honey flavor.  Nice. 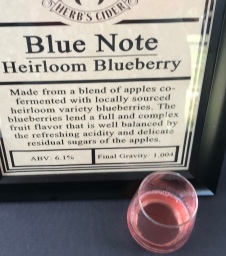 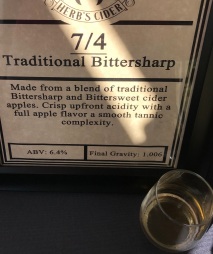 Herb’s (Bellingham WA) Crescendo:  Made from Cox Orange Pippin apples.  Dry.  Lots of orange with a hint of floral notes.

I was impressed with all 3 selections from Herb’s as they had some awesome flavor profiles, but I wish they had a bit more sweetness. 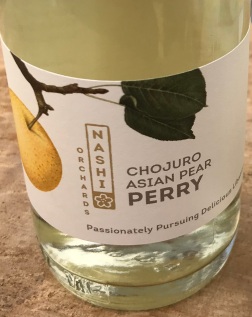 Nashi (Vashon WA) Idyllacres Bittersweet Cider:  Made from English & French bittersweet cider apples.  On the sweeter side of dry.  Tannic and complex.  Notes of apple pomace, orange, caramel, and leather.  Quite lovely.

Nashi (Vashon WA) Chojuro Asian Pear Perry:  Unique scent, of spice / black pepper.  However, the flavor profile was lemon and floral, with only a hint of pear.  Semi dry.  Perplexing.

You can tell what order I tasted these in, as I forgot to get photos of the last few…

Bauman’s (Portland OR) Dry:  Made from a variety of apples, including dessert and cider.  Dry, with notes of citrus & floral, and hints of bitterness & tannins.  A bit nuanced for my tastes.

Bauman’s (Portland OR) Orange Blossom:  Made with oranges and a hint of pineapple.  On the sweeter side of semi-dry, tannic, with notes of orange.  Great.

Bauman’s (Portland OR) Loganberry:  Made with loganberries.  On the drier side of semi-sweet.  Berry forward with mild tartness and hints of tannins.  I enjoyed the unexpected complexity.

Dragon’s Head (Vashon WA) Heritage:  Made from English and French cider apple varieties (previously named ‘Traditional’).  Dry to semi-dry.  Earthy, with sharp citrus heirloom apple flavor.  A bit nuanced for my tastes; I seem to remember the Traditional being sweeter.

For those in WA, check out the WA cider week event calendar for Sept 5-15.

Also, for cider industry folks in the NW, save the date for the first-annual NW Cider Symposium, which has been announced for March 10th 2020 in Tacoma WA.