Tasting notes #36 from the Schilling Cider House in the Fremont neighborhood of Seattle WA.  Check out my past posts from the cider house here.

I was here on a Monday afternoon with my husband and a friend from out of town.  We skipped work to hang out with our friend at Pike Place and the cider bar.  I ordered most of the ciders they had that I hadn’t previously tried.  It appears that most if not all of these are draft-only.

Independent Cider (Dryden WA) Barreled Blackberry Perry (5.9% ABV):  On the sweeter side of semi-dry, with berry, and a hint of oak (barrel), but no detectable pear

I liked the Blackberry Perry, but wasn’t too into the others, mostly as they were on the drier / tart / sharp / bitter side.  I probably should have just ordered something I knew I would like, but I like to try new ciders, especially at the lower price of a taster.  I was more excited about the bottle shopping I did – I picked up a bunch of Dunkertons (an English cider which is a favorite of mine that hasn’t been available for quite awhile) and Alpenfire (a local favorite), plus a few others.

Review of Independent Cider Lavender Perry.  It is my first time trying anything from this new cidery. 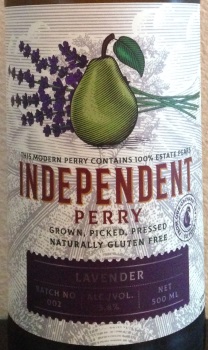 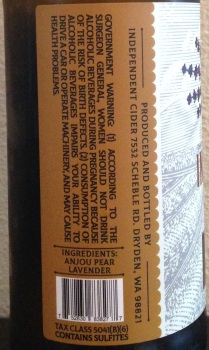 Availability:  likely only in Washington

Cider Description:  Floral aromatics of rose and honey followed by a clean herbaceous pallet of eucalyptus and pear…Semi Sweet…Two varieties of Lavender harvested down valley from our pear orchards were used to create our first botanical Perry. The blended buds from this mid-summer flower are dried and steeped to contribute subtle lavender notes and flavors.

Cidery Description:  Independent Cider juices pears from family orchards planted in the early 1900’s. Our heirloom pears, grown in the Upper Wenatchee Valley near Leavenworth, are harvested, juiced, fermented to dryness and aged in the orchards they grew in.

First Impression:  Nearly clear with a hint of purple.  Low carbonation.  Smells super mild, of lavender and a bit of sweetness.

My Opinion:  I didn’t like or dislike it.  I had expected more sweetness (and in turn more flavor), as pears have unfermentable sugars (sorbitol), so usually they are at least semi-dry, but this was definitely dry, and probably the driest perry I’ve ever tried.  My husband really liked it, probably as he likes both drier beverages and lavender.  He described it as similar to Brut champagne with lavender, while I thought it was more like a hard seltzer with lavender, as it was so mild.

Closing Notes:  I’d like to try their other varieties and see if any are sweeter and more flavorful, but from their website it looks like they ferment all their perries to dry, but describe some as being perceived sweeter (like this one, marked as semi-sweet).  Also, its interesting they went with the name ‘Independent Cider’, as at least for now it looks like they only make perry.  However, I guess a lot of folks probably don’t know what perry is.

Have you tried perry?  What did you think?