Review of Eden Ice Cider’s Heirloom Blend, aged in apple brandy barrels, made in 2013 in Newport VT.  I’ve tried a number of their ice ciders and sparkling ciders; see here.

Availability:  Their ciders are at least sold in AK, CA, CO, CT, DC, DE, IL, MA, MD, ME, MI, NC, NH, NJ, NM, NY, OH, OR, SC, VT, WA, and British Columbia, although this one has less distribution than their non barrel aged Heirloom Blend, which is most commonly found.  Eden also offers online sales when allowed by state.

Cider Description:  This limited release of our flagship Heirloom Blend Ice Cider has been aged in 10-year old barrels previously used for apple brandy. It has notes of caramel, apple sauce, and vanilla, a round, full mouthfeel, and plenty of acidity to create a lasting, refreshing finish.

Cidery Description:  Eden Orchards and Eden Ice Cider began on a trip to Montreal in 2006 when we first tasted ice cider and wondered why nobody was making it on our side of the border.  We had dreamed for years of working together on a farm in the Northeast Kingdom; it was a dream that had vague outlines including an apple orchard, cider, and fermentation of some sort.  That night we looked at each other and knew ice cider was it.  In April 2007, we bought an abandoned dairy farm in West Charleston, Vermont and got to work.  Since then we have planted over 1,000 apple trees, created 5 vintages of Eden Vermont Ice Ciders, and have introduced a new line of Orleans Apertif Ciders.  Out goals are to create healthy soils and trees in our own orchard, to support out Vermont apple orchard partners who do the same, to minimize our carbon footprint, to contribute to the economic and environmental health of our employees and our Northeast Kingdom community, and most of all to make world-class unique ciders that truly reflect our Vermont terroir.

They have a tasting bar on the main floor of the Northeast Kingdom Tasting Center in downtown Newport VT.  Their current product line includes at least eight ice ciders, two Aperitif ciders, and dry & semi-dry sparkling ciders.  They also have a cider club where members get access to special release ciders not available to the public.

Price:  $17 / 187ml
Where Bought:  through their website
Where Drank:  home
How Found:  Browsing their online store.  I enjoyed their Heirloom Blend, and loved their Northern Spy barrel aged cider, so it wasn’t a hard sell. 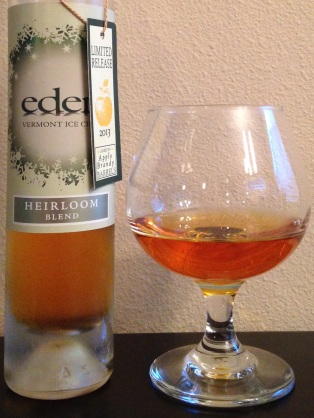 My Opinion:  Amazing!  I enjoyed the barrel aged and brandy qualiies of this ice cider.  Due to the sweetness this is definitely a beverage to sip only a small quantity after dinner, but that means even a small bottle lasts awhile.  It also kept very well in the fridge, without any noticeable flavor change during the week I had it open.  I think this is my favorite of their ice ciders so far, just slightly above Northern Spy (see here), as it had the added apple brandy flavor in addition to just the oak aging.

Closing Notes:   This was another impressive cider from Eden Ice Cider.  I still have their Windfall Orchard ice cider left to try, which I ordered at the same time.

Have you tried Eden Ice Ciders?  What did you think?